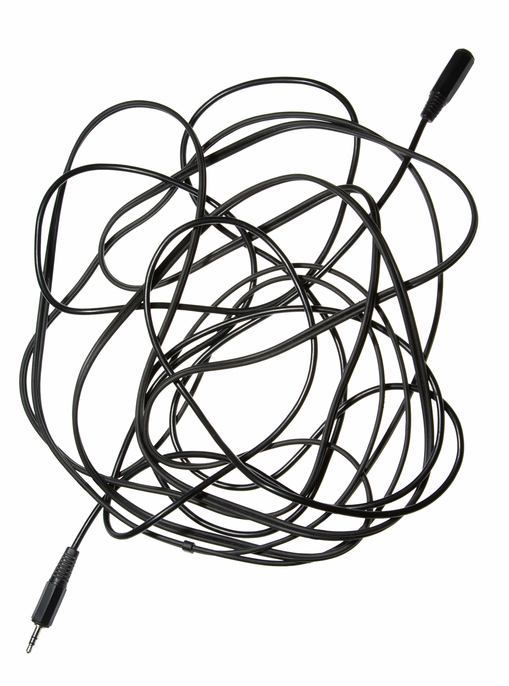 Getting kinks in electrical wires can be really annoying.

A kink is a twist in anything long and flexible, like a rope or wire, and also a pain or stiffness in a muscle. Figuratively, a kink is any flaw than could cause problems to the functioning of a machine or something that could get in the way of a plan. In slang, a kink is unconventional sexual behavior. As a verb, to kink means ‘to form kinks’ or ‘to make kinks in something.’

The lyrics are also available to read below the video.

The related adjective kinky can refer to something that has lots of kinks in it, but can also refer to unconventional sexual behavior or anything related to it. You can call a person who indulges in unusual sexual behavior kinky, for example, or use it to describe sexy clothing or sex toys. It can be used for quite mild things, like calling sexy lingerie “kinky underwear,” but also for things that are further outside the bounds of normal convention. (We’ll leave those to your imagination!)

Kinky hair is a colloquial way to describe what researchers call afro-textured hair—in other words, the tight curly hair common in people of African and Aboriginal Australian descent, as well as those from some regions in Asia. The term kinky used to be pejorative in the US when said about hair, since this hair texture was considered inferior by some people, but it has since been taken back and celebrated. For centuries, beauty and style trends in many countries were based on European standards, and therefore, straight or slightly curly hair. Natural kinky hair was considered unkempt, and some schools and workplaces went as far as to forbid these “natural” styles. The consequence was that most men and women of African, Aboriginal or Asian descent with this hair texture straightened their hair with harsh chemicals that damaged their hair and scalp, or, in the case of women, wore wigs or weaves to hide their natural hair. Kinky hair made a comeback in the US in the 1960s with the black power movement, when the afro became a statement celebrating the natural beauty of African hair. Since then, the popularity of natural hairstyles has come and gone, but lately the natural hair movement has taken off, and there is a huge variety of hairstyles, including afros and puffs, braids and twists, dreadlocks and conks, as well as products designed to care for and style naturally kinky hair.

Kink, meaning a twist, knot or contraction in rope, string or hair,’ dates back to the mid-17th century. It comes from the Dutch kink, which means a ‘twist in a rope.’ It can be traced back to the Old Norse kikna, which meant ‘to bend backwards or sink at the knees,’ and also may be the origin of the English verb kick. The figurative sense for an odd notion, a whim or a mental twist is from the early 19th century, and was first recorded in the writings of Thomas Jefferson. The sexual connotation (an unconventional sexual interest or behavior) derived from this sense, and dates back to the 1970s. The verb comes from the noun, and first appeared in the late 17th century.

See full definition
Learn more about kink in our forums

Kink in other languages