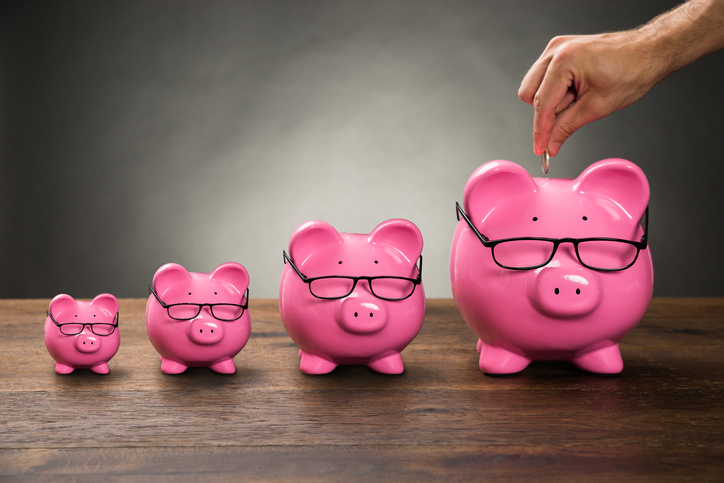 We hope your piggy banks are nice and full.

A bank is an institution that receives, lends, and keeps money safe, or it is a storage facility for a particular thing. The related verb to bank means ‘to have an account with a bank’ or ‘to use that bank’s services.’ Unrelatedly, a bank is a pile or heap, a slope, and, in particular, the slope of land on the sides of a river or stream. To bank means ‘to border with a bank,’ ‘to form into a bank,’ and also ‘to cover a fire with ashes or fuel to make it burn slowly.’ A bank is also a group of objects in a line or row.

bank on something: be sure of something. Example: “That invention is going to change the world; you can bank on it!”

A bank robber, unsurprisingly, is someone who robs banks. “Bankrobber” is a 1980 single by English punk rock band The Clash. You can listen to the song and read the lyrics here:

Much like the spelling of the title as one word instead of two, some of the grammar used in the lyrics is nonstandard. Can you see any examples?

The 2016 movie Hell or High Water is also about bank robbers—specifically two brothers who go on a spree robbing branches of one particular bank. We won’t tell you why, but you might be able to work it out from the movie trailer which you can see here:

Bank is also what an aircraft does when it tilts into a turn. Example: “The pilot banked the plane around to come in to land.”

A piggy bank is a container with a slot in the top for children (mainly) to save small amounts of money in. Traditionally they were made of porcelain or pottery and were in the shape of pigs. It would be reasonable to think that is why they are called piggy banks, but actually the name comes from a small earthenware jar or pot that was called a pygg because that was the name of the cheap clay they were made from. In the Middle Ages, if people had any spare coins, they would put them into the pygg to save them up. Therefore, they would call the pygg their “pygg bank” or “pyggy bank.” A long time later, in the 19th century, potters started getting requests to make pyggy banks for children. For most people, the old meaning of pygg as a type of clay had long since been forgotten, so the potters made the banks in the shape of pigs. These days, you can get piggy banks in a variety of shapes, but we still call them piggy banks.

Bank, the financial institution, dates back to the mid-15th century. It comes from the Italian word banca, which means table or counter, and figuratively, a moneychanger’s or moneylender’s table, which brought us to the notion of a bank in the modern sense. Some believe it may have entered English through the French banque, also from the Italian word. It can be traced back to the Old High German noun bank, meaning ‘bench’ or, figuratively, ‘moneylender’s table,’ and originated in the Proto-Germanic root bankiz-, which meant ‘shelf.’ The first use of the term in English to mean ‘an institution that receives and lends money’ was in the early 17th century. The verb, meaning ‘to act as a banker,’ comes from the noun, and dates back to the early 18th century. Its meaning expanded to ‘putting money in the bank’ in the early 19th century. The figurative sense, ‘to count on something,’ first appeared in the US in the late 19th century. The (almost) unrelated sense, meaning ‘a pile, slope or heap,’ especially next to a body of water, dates back to around the year 1200. It came into English through a Scandinavian source, possibly the Old Norse banki or the Old Danish banke, both meaning ‘sandbank.’ They can be traced back to the Proto-Germanic noun bankōn, which meant ‘slope.’ This is related to the root bankiz-, which gave us the other meaning of bank. The verb, meaning ‘to form a bank or slope,’ comes from the noun, and dates back to the late 16th century. The meaning ‘to ascend’ is from the late 19th century, and its use related to airplanes is from the early 20th century.

See full definition
Learn more about bank in our forums

Bank in other languages

Bank was suggested by Helen, from Chicago.