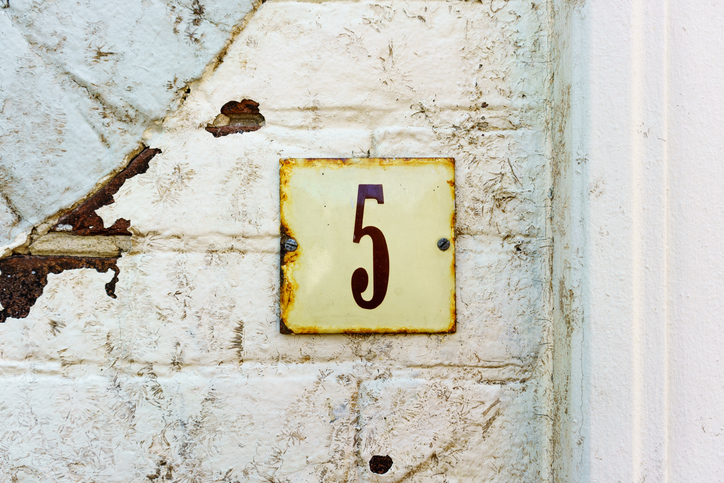 Five is a prime number.

You might know that as an adjective, prime means ‘of top quality,’ ‘of great importance,’ ‘of great value,’ and ‘first in order.’ It also means ‘basic, fundamental.’ As a noun, prime is the most flourishing state of something or someone or the time of early adulthood. As a verb, to prime means ‘to prepare someone for something’ and also ‘to supply a gun with powder.’ When painting, prime means ‘to cover with an undercoat of paint.’

prime the pump (mainly US): to increase government spending to stimulate the economy. Example: “Economists agreed that the best way to tackle the recession was the prime the pump.”

Of course the prime, or prime time, of your life is the best time to do many things and we should all seize the opportunity while we can. Here is a song about just that, entitled “Prime Time of Your Life,” by French electronic music duo Daft Punk:

In mathematics, a prime number is a number that is only divisible by 1 and itself. They are used in cryptography and many complex mathematical calculations, and are very important in computing. Here’s a video of a mathematician explaining why 1 is not considered a prime number:

Prime time on television is the time of day when the largest numbers of people are likely to be watching. The expression prime time is much older than television, though. It dates back to around the year 1500, and originally meant springtime. It was first used in broadcasting in the US in 1961.

The first recorded use of prime was before the year 1000, as a noun. The Old English prim and Middle English prim(e) was the ‘first hour or canonical hour,’ which would have been 6 a.m., the hour of the first religious service. It comes from the Latin prīma (hōra), which literally means first hour (6 a.m. was, in fact, the first hour of the Roman day). The Latin noun comes from the Latin adjective prīmus, meaning ‘first,’ and figuratively ‘chief, main, excellent, or noble.’ It can be traced back to the Pre-Italic prismus, a superlative form of the Proto-Indo-European root preis- (before). The sense ‘most vigorous stage,’ usually to describe a person in their 20s, is from the early 17th century. The adjective dates back to the late 14th century, and comes from the Latin adjective prīmus. The original meaning, ‘first in order,’ was expanded to include ‘most important’ and ‘first-rate’ (the latter mostly in the US) in the early 17th century. Its use in math (prime number) is from the 1560s. The verb comes from the adjective, and dates back to the early 16th century. It originally meant ‘to prepare a weapon,’ but the meaning has expanded to include other forms of preparing something.

See full definition
Learn more about prime in our forums

Prime in other languages