Intermediate+ Word of the Day: pawn 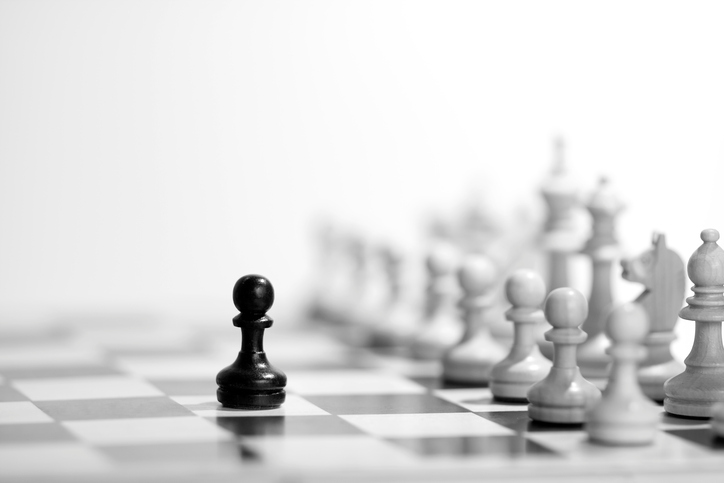 To pawn is ‘to deposit something valuable with a pawnbroker,’ a person who takes objects as a deposit and, in exchange, lends money, keeping the object until the money is repaid. Figuratively, it means ‘to pledge or stake,’ although this meaning is rather literary. As a noun, a pawn is the act of pawning, the state of being deposited, and the object being deposited with a pawnbroker. It can also mean ‘hostage.’ Unrelatedly, a pawn is a chess piece, the one with the lowest value, and, figuratively, someone used to further another person’s purposes.

There is a 1964 movie named The Pawnbroker, based on a novel of the same name, about a Holocaust survivor running a pawnshop in East Harlem.

In heraldry, a pawn is a peacock, which is a bird with large feathers. Pawn was previously used more widely, mainly in Scotland, as another word for peacock.

Pawn, meaning ‘something left as security,’ dates back to the late 15th century and comes from the Old French pan or pant (‘pledge or security,’ but also ‘booty or plunder’). It is probably from Frankish or another West Germanic source and is related to the Old High German pfant, the German Pfand, the Middle Dutch pant and the Old Frisian pand, all of which mean ‘pledge.’ Some linguists think that, since the Old French word pan also meant (unrelatedly) ‘a piece of cloth,’ the origin for this meaning (the Latin pannum) could be the origin for both, using the figurative sense of ‘cloth’ as an article commonly traded. The verb comes from the noun, and dates back to the mid-16th century. The chess meaning of pawn is unrelated and older. It dates back to the late 14th century, as the Middle English word paun, from the Anglo-French poun and (earlier) the Old French peon. It can be traced back to the Medieval Latin pedonem, or ‘foot soldier,’ an evolution of the Late Latin pedonem (person going on foot), from the Latin pes (foot). It can be traced all the way back to the Proto-Indo-European root ped-, meaning ‘a foot.’ It has been used figuratively to describe people since the late 16th century.

See full definition
Learn more about pawn in our forums

Pawn in other languages