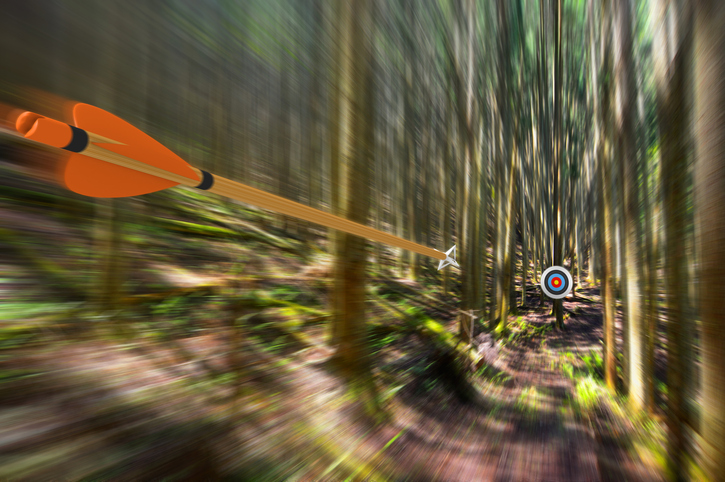 Arrows have notches so they can be fitted onto the bowstring.

A notch is a V-shaped cut or indention made on a surface and also a cut made on a stick or other object in order to keep count of something. It is also the indentation made in the end of an arrow, so that the arrow will fit onto the archer’s bowstring. A notch is also a degree in a scale. As a verb, to notch means ‘to cut or make a notch,’ ‘to keep a record using notches,’ ‘to fit an arrow to a bowstring,’ and ‘to score, as in a game,’ often followed by up.

notch up, notch down: to move up or down in small amounts. Example: “The temperature has finally notched up a few degrees, now that spring is here.”

top notch: excellent. Example: “You have to go to that new restaurant in town; the food there is top notch.”

notch on your belt: one of a series of successful achievements. Example: “Landing that contract was another notch on the businessman’s belt.”

Markus Persson, the creator of the popular game Minecraft, is known as Notch. Here is a short video clip showing you five things that make Notch angry in Minecraft:

You may sometimes hear people talking about notches on someone’s bedpost. This is an informal and usually humorous way to refer to people’s sexual partners. Example: “These days, most people have a few notches on their bedposts before they settle down with a long-term partner.” However, you should be careful how you use it, as it can be derogatory, especially if you suggest that one person is only another notch on the bedpost for someone else.

Notch dates back to the late 16th century. The noun notch actually comes from a previous noun, otch: in Middle English writing, people often wrote the ‘a’ or ‘an’ in front of a noun with no space between them, so the construction “an otch,” could be “anotch” and the n eventually became part of the noun (this has happened in other cases, like nickname and newt!). The original noun otch dates back to the late 14th century, and comes from the Old French oche (meaning ‘notch’). The origin before then is unknown. The same is true for the verb; to notch appeared in the late 16th century, but the Middle English verb ochen, meaning ‘to cut or slash’ has existed since around the year 1400. We can’t really say that the verb comes from the noun (in English) though, because the verb came from the Old French ochier (to notch or make a cut). It is likely that, in French, the noun came from the verb.

See full definition
Learn more about notch in our forums

Notch in other languages