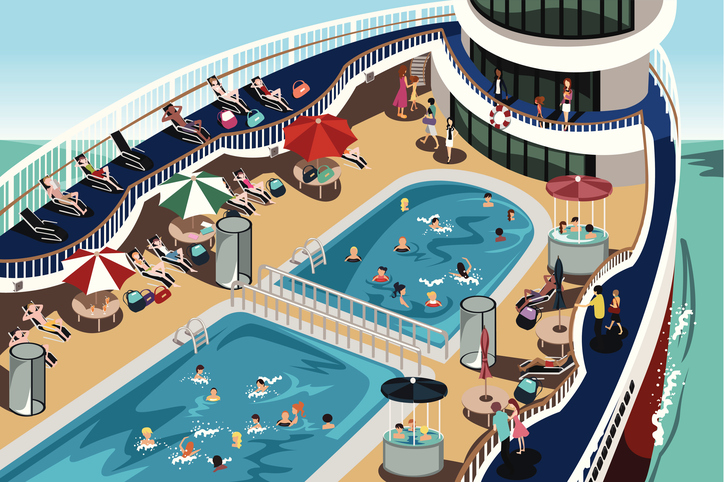 In nautical terms, the deck is the surface, similar to a floor, on a ship. Any place suggesting the surface of a ship is also called deck. Outside a house, a deck is an open, unroofed surface, usually made of wood and extending from the house. A deck is also a pack of playing cards. As a verb, to deck, followed by the adverb out, means ‘to dress in a fancy way’ or ‘to decorate in an elegant and fancy way.’ Informally and related to the floor meaning, it also means ‘to knock someone down with a punch.’

clear the decks: make time for more work by dealing with outstanding tasks. Example: “I’ll be happy to take on that new project on Monday; I just need to clear the decks first.”

hit the deck: fall or drop to the ground. Example: “The armed robbers told all the bank’s customers to hit the deck.”

on deck (US): present and ready to act or work. Example: “The whole sales team was on deck to help with the store’s annual sale.” We also have the related phrase all hands on deck, which means that everyone is ready to work.

Decks of cards are, of course, often used in magic tricks. This video shows you how to get started, by fanning the cards:

The parts of hi-fis or stereos used for playing records and cassettes are called record decks and tape or cassette decks.

Red double-decker buses are iconic symbols of London. Here you can see some archive footage from 1950 of a bus journey into London on a double-decker.

(Please note that although the word cripple would have been considered normal in 1950, it would be considered unacceptable today to describe a disabled person).

Deck dates back to the early 15th century, meaning ‘to decorate or adorn.’ While we now mostly see the verb with this meaning, used with the preposition out, its original use can be seen (and heard) in the Christmas carol “Deck the Halls.” It comes from the Middle Dutch Decken, meaning ‘to cover or put under a roof,’ and was used in nautical language. It can be traced back to the Proto-Germanic thakjan, from the Proto-Indo-European root (s)teg-, meaning ‘to cover.’ It is related to the Dutch dekken and the German decken. The meaning expanded to include ‘to cover’ in the early 16th century, replacing the Old English verb þeccan (pronounced theckan, with the th as in thought). The noun, meaning ‘a covering over part of a ship,’ which dates back to the mid-15th century, does not come from the verb; rather, it came into English along the same path: from the nautical use of the Middle Dutch dec or decke (covering or roof). It can be traced back to the Proto-Germanic noun thakam (roof), from the same Proto-Indo-European root as the verb. It is related to the English word thatch. The sense soon extended from the covering over part of a ship to its platform. The sense ‘pack of cards’ is from the late 16th century, probably because the cards were stacked like the decks on a large ship. The verb meaning ‘to knock down’ dates back to the mid-20th century, and comes from the noun. The term double decker was first used about ships in the 1830s, and to describe road vehicles in the 1860s (well before the London buses came to be).

See full definition
Learn more about deck in our forums

Deck in other languages