Intermediate+ Word of the Day: picket 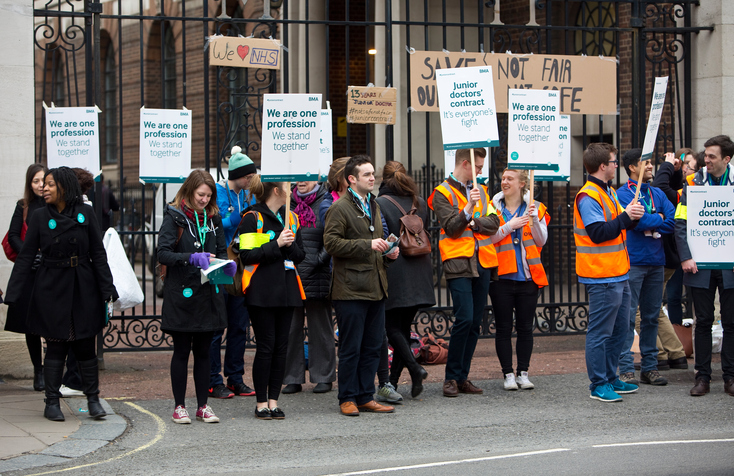 A picket line of junior doctors from strikes in England

A picket is a post stuck into the ground that is used to hold up a fence or to pitch a tent. In military terminology, a picket is a soldier or small group of soldiers placed in one position to warn other soldiers about an enemy advance. When a strike happens, a picket is a person or group standing outside the building or store that’s on strike and persuades other workers to join the strike and not to go to work. Any other person or group engaged in a similar demonstration is also called a picket. To picket means ‘to enclose with pickets,’ as in a fence, and ‘to put pickets around a building during a strike.’

One of the best known cases of industrial action in the UK was the long-running coal miners’ strike of 1984-85. The miners were striking to try to prevent the mines from being closed by the government. There were many pickets, including flying pickets, which is a technique used against companies with a lot of different premises, where groups of picketers can be organized at short notice and transported to any of the company’s locations. Ultimately, the strike failed and the government closed many mines, creating large-scale unemployment in many areas where coal mining had been the main industry. You can see images from the strike in this video, accompanied by Billy Bragg’s song “Never Cross a Picket Line”:

Today is International Workers’ Day, a day when demonstrations and marches are held in many countries across the world to celebrate the working classes and the ongoing struggle for better working conditions. The date was chosen both to coincide with May Day, which was already an important spring celebration in many countries, and to commemorate the Haymarket affair in Chicago, which was a workers’ demonstration that took place on May 4, 1868, as part of a campaign for the working day to be reduced to eight hours. The demonstration ended in violence when someone threw a bomb at the police, who responded by shooting at the demonstrators, killing four of them. Many workers’ demonstrations still take place around the world on May 1, and it is a public holiday in many countries.

See full definition
Learn more about picket in our forums

Picket in other languages