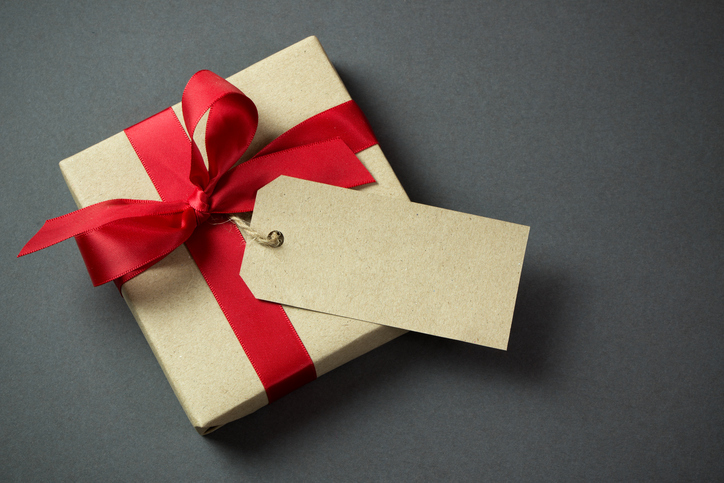 Don't forget to attach a gift tag to your wrapped gift.

A tag is a piece of paper attached to something or a small loosely attached part of something. It is also a phrase or word used to describe something or someone, a label or identifier. In computing, it is a symbol that indicates the beginning and end of a unit of information. As a verb, to tag means ‘to attach a tag to something’ and ‘to give a name or label to something or someone.’ In US English, to give someone a traffic ticket is also to tag. Informally, to tag, often followed by along, means ‘to follow someone closely.’ In social media, to tag someone means that you add their name to a post to associate them with it.

tag up (baseball): to touch the base occupied, before attempting to advance a base, after catching a fly ball. Example: “Marcus tagged up at third base before he made a sprint towards home plate.”

tag team: at least two people who alternate doing something. “My mom and I are a tag team and take turns babysitting my nephew on Monday nights.”

For graffiti artists, their tag is a nickname or some identifying sign they use on their work and to tag is to mark their work in this way. If you fancy trying your hand at some graffiti, here’s a short video explaining how you can get started on creating a tag:

Informally, and mostly in the US, a tag is a car’s license plate.

Tag is a children’s game in which one player chases the others and tries to touch one of them. As soon as he or she succeeds, the touched player then becomes the one to chase the others, and so on.

Tag dates back to the late 14th century, as the Middle English noun tagge, which meant ‘a small hanging piece,’ usually on a garment. Linguists are not sure how it came into English, but most believe it came from a Scandinavian language, since it is related to the Norwegian tagg (point, prong, barb) and the Swedish tagg (prickle, thorn). Its origin is Germanic, and it can be traced back to the Proto-Germanic root tag-, meaning ‘part hanging loose’ (probably the metal part at the end of a piece of string or cord, originally), and is related to the Middle Low German tagge (twig, branch or spike). The verb, meaning ‘to furnish with a tag,’ also dates back to the late 14th century, and comes from the noun. The meaning ‘to go along or follow” is from the late 17th century. Tag, the children’s game, first appeared in the early 18th century. The name is a variation of the Scottish tig (tough or tap), which came, in turn, from the Middle English tek (touch or tap). Its use as a verb in this sense is from the late 18th century, and it has been used in baseball since the early 20th century.

See full definition
Learn more about tag in our forums

Tag in other languages