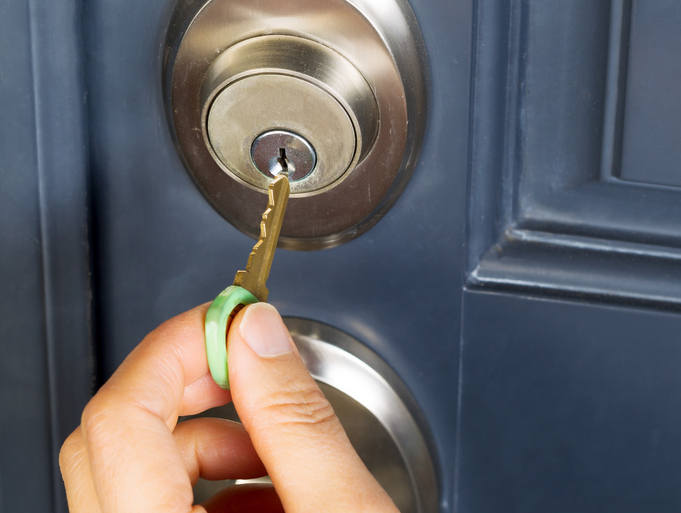 A lock is a device we use for keeping something closed and fastened and, on old guns, it is the mechanism that explodes the charge. In US English, it is also complete control or an unbreakable hold on something and, informally, a sure thing. To lock means ‘to close and fasten with a lock,’ ‘to hold in an embrace,’ or ‘to unite firmly.’ Unrelatedly, a lock is a section of hair, especially a curl or a piece that has been cut off and given to someone, and, in the plural, locks means ‘hair.’

lockdown: a security measure in which people have to remain confined in a building or area for a period of time. During the COVID-19 crisis, exact lockdown measures have varied from country to country, but in most cases people have been required to stay in their own homes as much as possible, and travel has been restricted between countries and even between districts and cities within countries. Example: “The government hopes the lockdown will slow the spread of the virus.”

lock in: commit unalterably. Example: “We are now locked into this course of action; we have to see it through.”

lock up: imprison. Example: “The criminal was found guilty and locked up for his crimes.”

lock out: keep out by means of a lock. Example: “A gust of wind blew the door shut behind Veronica and she found herself locked out of the house.”

lock stock and barrel: completely, entirely. Example: “We sold all our possessions, lock, stock, and barrel.”

We will probably have a lot of stories and moments to remember after the COVID-19 lockdown is over. Luckily, some of them will be happy ones, as people all over the world are finding inventive ways to stay connected without breaking lockdown rules, like these British neighbors having a social distancing street dance and singalong! Are you finding any creative ways to get through this lockdown crisis?

Of course, another consequence of lockdown is, with fewer people on the streets, wildlife is beginning to venture into places you wouldn’t usually expect to find it. That has happened in the Welsh town of Llandudno, which has found itself invaded by goats! You can see them making themselves at home in the streets of the town in this video:

Lock, Stock, and Two Smoking Barrels (a barrel is the tube of a gun) is the title of a 1998 movie by British director Guy Ritchie. You can watch the trailer here. The accents in the movie are so thick (ie, they are very strong accents) that some native speakers of English (particularly ones not from England) can have trouble understanding them. How much do you understand?

You also find locks on canals. They are enclosed chambers with a gate at either end for raising or lowering boats from one level to another by increasing or decreasing the water level in the chamber.

In UK English, a lock-in is an unofficial continuation of drinking after a pub’s closing time. The pub landlord or landlady will close the pub, locking themselves and all the customers in, as well as locking any newcomers out, and will then continue to serve drinks to those who are there. Here’s a video clip of Irish actress Saoirse Ronan explaining the concept to Jimmy Fallon on the Tonight Show:

Lock dates back to before the year 900. The Old and Middle English loc meant ‘bolt or appliance for fastening a door, lid, etc.,’ or ‘an enclosure or barrier,’ as well as figuratively, ‘a bargain, agreement, settlement or conclusion.’ It can be traced back to the Proto-Germanic verbal root lukan (to close), and is related to the Old Frisian lok (enclosure, prison or concealed place) the Old Norse lok (fastening or lock), the Gothic usluks (opening), the Old High German loh (dungeon), the German Loch (opening or hole), and the Dutch luik (shutter or trapdoor). The old sense of barrier or enclosure included, in the late 13th century, a ‘barrier in a stream or canal,’ and led, in the mid-16th century, to the sense of the locks used on channels to raise or lower boats. The figurative sense in wresting (a fastening together) dates back to the late 16th century. The verb, meaning ‘to fasten with a lock,’ or ‘to shut or confine,’ comes from the noun, and dates back to around the year 1300. However, there was an earlier Old English verb, lucan, which had a wider sense, ‘to lock or close,’ and came from the same origin. It is related to the Old Saxon lukan, the Old High German luhhan, the Old Norse luka and the Gothic galukan, all meaning ‘to lock.’ The sense to fasten parts together’ is from the late 14th century, and was originally used about armor. The figurative sense ‘to hug or embrace tightly’ first appeared in the mid-14th century.

See full definition
Learn more about lock in our forums

Lock in other languages

Lock was suggested by Helen, from Chicago