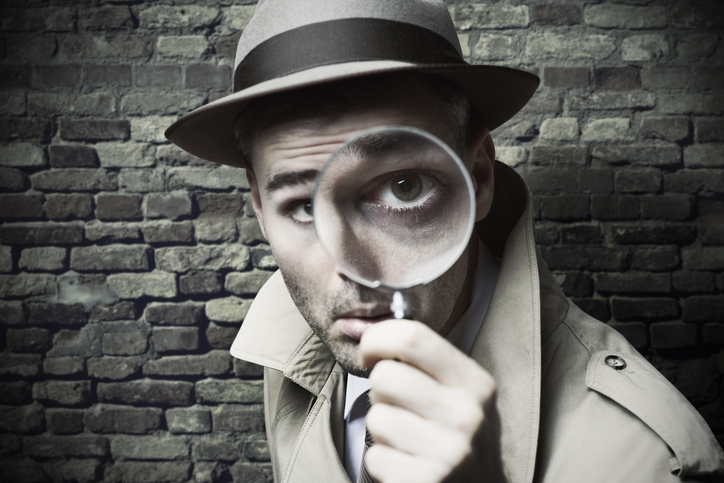 If you snoop, it means that you go around in a sneaky way trying to get information or see something that would usually be kept private. As a noun, a snoop is the act of snooping. Informally, someone who does this is also called a snoop, or a snooper, and sometimes a private detective can also be called a snoop.

The dog in the Peanuts comic strip is called Snoopy. However, this not because he snoops. In fact, the creator of the comic strip, Charles Schulz, was going to call the dog Sniffy, but discovered there was already a cartoon dog with that name. Nonetheless, Snoopy did sometimes appear as a detective, as in this 1987 commercial featuring characters from Peanuts:

A snooperscope is a device worn on the head that enables the wearer to see in the dark through the use of infra-red radiation.

Recently, in some Midwestern US cities, snoop has begun to be used as a verb meaning ‘to grab, get, or acquire,’ so someone might say, “Could you move so I can snoop my coat from that hook behind you?” Interestingly, in the early twentieth century, snoop was occasionally used to mean ‘to steal,’ probably as an extension of the idea of sneakily trying to acquire information, but this meaning quickly fell out of use. It is possible that the more recent meaning of ‘grab’ or ‘get’ is related to this.

Snoop, meaning ‘to go around in a prying manner,’ dates back to the early 19th century, and originated in the US.  It comes from the Dutch verb snoepen, which can mean ‘to pry,’ ‘to sneak’ or ‘to take and eat food in secret.’ It probably came from a variation of the Dutch verb snappen (to bite or snatch), and therefore, it is related to the English word snap. The meaning ‘to pry into somebody else’s things or business’ is from the early 20th century. The noun, meaning ‘the act of snooping,’ comes from the verb, and dates back to the late 19th century. It was first used to describe a person who snoops in the early 20th century (they were called snooper before then), and the meaning expanded to ‘detective’ in the 1940s, though that sense is dated now.

See full definition
Learn more about snoop in our forums

Snoop in other languages