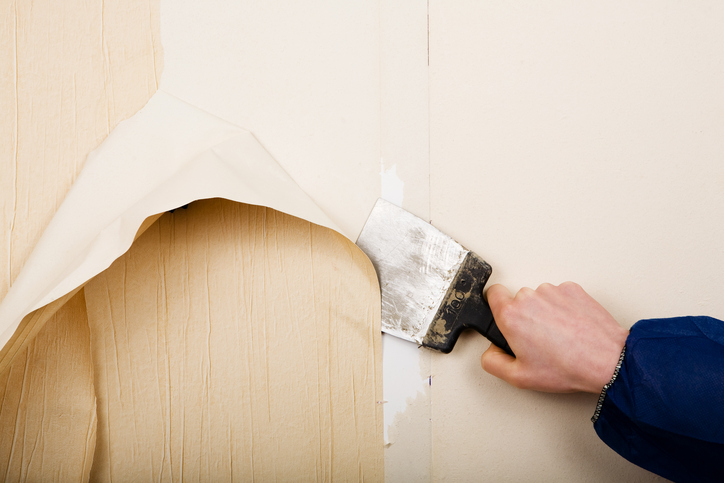 Stripping wallpaper can be hard work.

You might know already that strip means ‘to remove your own or someone else’s clothes.’ More generally, it means ‘to remove the covering from something’ and even simply ‘to remove.’ It also means ‘to clear out, empty.’ Unrelatedly, a strip is a long, narrow piece of material, land, or water and, in US English, often with a definite article, also a commercial area along a road. The related verb to strip means ‘to cut something into strips.’

comic strip: a series of cartoon drawings. Example: “There is a really funny comic strip in today’s newspaper.”

dragstrip: a track for drag racing. Example: “The cars raced along the dragstrip.”

tear someone off a strip (UK): reprimand someone harshly. Example: “Ian’s boss tore him off a strip for being late again.”

strip off: when used without any object, this means to take all, or nearly all, your clothes off. Example: “The lovers stripped off hastily and tumbled into the bed.” (When used with an object, it means ‘to remove something from something else.’) Example: “Judah stripped off his bandage quickly.”

strip something down: take apart completely, usually used about mechanical objects. Example: “The mechanic stripped the engine down.”

striptease: a dance where someone takes their clothes off slowly. Example: “Lucy performed a striptease for her husband, to get him in the mood.”

The 1997 movie, The Full Monty, is about a group of unemployed men who decide to start a new career as strippers (people who perform stripteases). Here is a clip from the movie showing the men doing their routine:

There is also a song, by Chris De Burgh, called “Patricia the Stripper,” which you can listen to here:

If you strip a bed, you take all the sheets, pillow cases, quilt covers etc. off, so that they can be washed.

A Mobius (or Möbius or Moebius) strip is a surface with only one side, and only one boundary (a closed circle) in three-dimensional space. You can easily make one by taking a strip of paper, giving it a half-twist, and taping or gluing the ends together.

Strip dates back to the late 12th century, as the Middle English strippe(n), meaning ‘to make something bare.’ It comes from the Old English verb stem -stryppan or -streippan (usually found with prefixes, such as bestryppan, meaning ‘to plunder’), which meant ‘to plunder, to despoil or to strip someone of something.’ It can be traced back to the Proto-Germanic verb straupijan, and is related to the Middle Dutch stropen (to strip off, or to go around plundering), the Old High German stroufen (to strip off or plunder), and the German streifen (to strip off, touch upon, ramble, roam or rove). It has been used to mean ‘unclothe someone’ since the early 13th century, and in an intransitive sense since the late 14th century. To strip has been used to mean ‘to perform a striptease’ since the early 20th century. The noun strip is not related to the verb. As a noun, strip, meaning ‘a long, narrow, flat piece of something,’ dates back to the mid-15th century. It has the same origin as the English word stripe: it came into English from the Middle Dutch or Middle Low German stripe (stripe, streak), and can be traced back to the Proto-Germanic stripan and the Proto-Indo-European root streig- (to stroke, rub or press). It is related to the Danish stribe, ‘a striped fabric,’ the German Streifen, ‘stripe,’ and the Old Irish sriab, ‘stripe.’

See full definition
Learn more about strip in our forums

Strip in other languages