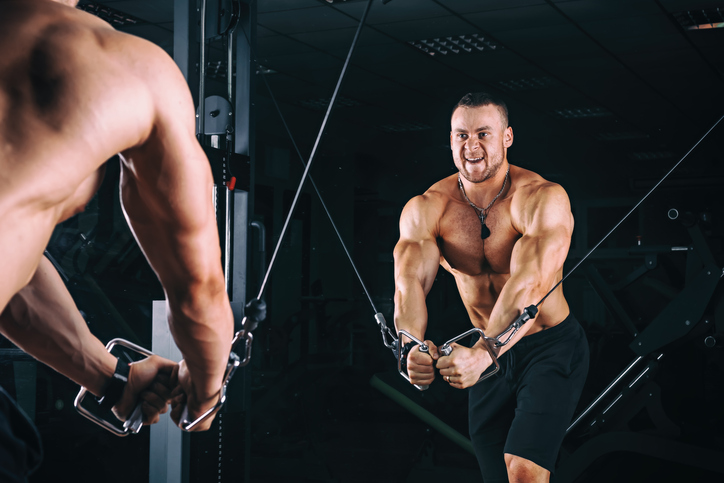 If you want to bulk up your muscles, you need to exercise.

Bulk is great size or weight and also the greatest part of something. We also use it, usually with a possessive adjective, to talk about someone’s body, especially a large and heavy body. As an adjective, it refers to the transportation of cargo in large volumes, rather than individual packages, or anything bought or sold in large quantities. To bulk means ‘to swell or increase in size,’ usually with the adverbs up or out, and, often with large, ‘to be of great importance.’

in bulk: in large quantities or amounts. Example: “I do a lot of baking, so I buy my flour in bulk.”

In the world of bodybuilding, bulking refers to building muscle mass. In order to do this, you have to increase your overall weight, but you have to be careful to put on muscle rather than fat. Trying to gain muscle while only gaining minimal fat is known as lean bulking. Here’s a video with some tips on how to do it:

In architecture, a bulk is a structure projecting from the front of a building.

It used to be considered incorrect to use a plural noun after bulk, but this has now come to be acceptable, so you could talk about “the bulk of the company’s employees,” to mean the majority of people working somewhere, for example.

Bulk originally meant ‘a ship’s cargo,’ but soon after added the meaning ‘a heap.’ It dates back to the mid-15th century, as the Late Middle English bolke. Its exact origin is unknown, but it’s likely that it came into English from a Scandinavian source, as it is similar to the Old Norse bulki (‘a heap’ or ‘a ship’s cargo’). It can be traced back to the Proto-Germanic root bul-, and further back to the Proto-Indo-European root bhel– (to blow or swell). The meaning soon extended to ‘belly’ and later to ‘size,’ due to a confusion with an obsolete word, boul, which meant ‘belly.’ This word came from the Old English buc (body or belly), and can be traced back to the Proto-Germanic bukaz, which is also the origin of the word bucket. The verb comes from the noun and, meaning ‘to swell or become massive,’ dates back to the mid-16th century.

See full definition
Learn more about bulk in our forums

Bulk in other languages