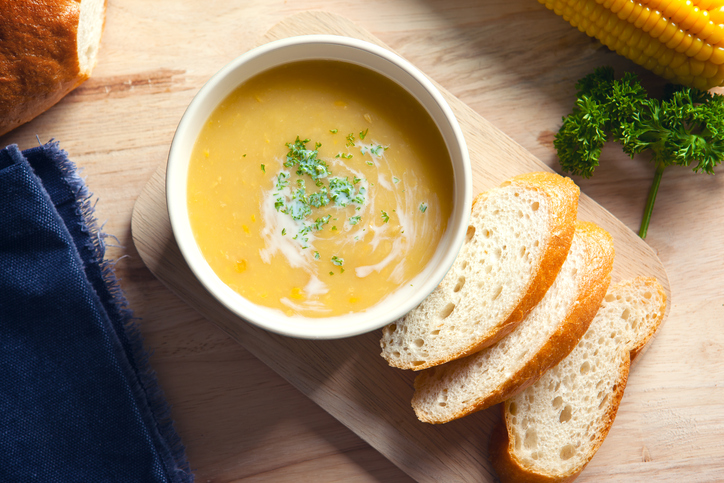 It's always nice to have bread to sop up your soup.

A sop is a piece of solid food, usually bread, used for dipping in liquid food like soups or gravies. Figuratively, anything completely soaked can be called a sop. Something of little value given to someone to keep them satisfied or quiet is also called a sop. Colloquially, a weak and foolish person is also a sop. As a verb, to sop means ‘to soak in liquid’ and, figuratively, ‘to make really wet.’

sop up: to absorb a liquid. Example: “Everyone had bread to sop up the soup.”

There is a Jimbo Mathus song about sopping up gravy, which you can listen to here:

The most common meanings of sop as a noun is now the figurative sense of something given to someone to keep them quiet and happy.

SOP (pronounced S-O-P) also means “standard operating procedure,” which is a set of instructions telling workers within a company or organization how to deal with routine tasks.

Sop dates back to before the year 1000. The Old and Middle English sopp-, meaning ‘bread soaked in liquid,’ is usually found in compounds like soppcuppe (cup for sop). It can be traced back to the Proto-Germanic root supp- and the Proto-Indo-European root seue– (to take liquid). It is related to the English verb, now rare, sup (to sip), as well as the Old Norse soppa (to sop) and supa (to sip), the Middle Low German supen and Dutch zuipen (to drink or tipple), and the Old High German sufan and German saufen (to drink, especially alcohol). While it is not related to the word soup, its use was probably reinforced by this term, when it was adopted from the Old French soupe. The verb, which comes from the noun, also dates back to before the year 1000, as the Old English verb soppian. The verb was not recorded in Middle English, but reappeared in Modern English.

See full definition
Learn more about sop in our forums

Sop in other languages