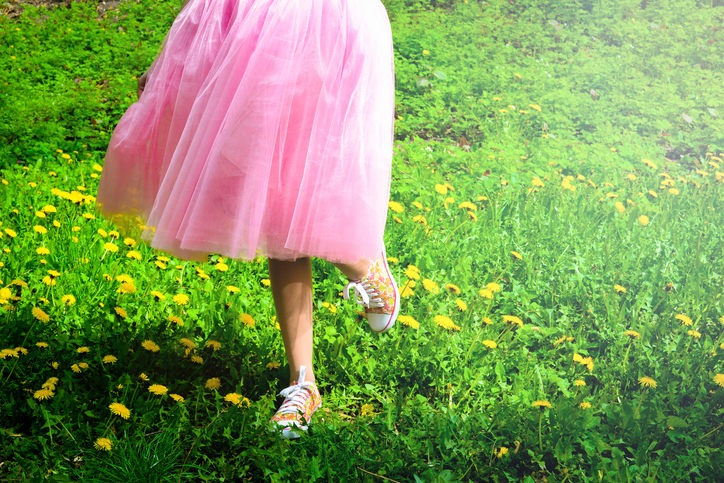 You might know already that a skirt is a piece of clothing that hangs downward from the waist and is not joined between the legs, and also the part of a dress that hangs from the waist. As a slang term in US English, a woman can be called a skirt (in UK English, we would say “a bit” or “a piece” of skirt), but this would usually be considered offensive. In the plural, skirts or outskirts are the outlying parts of a place or group. This latter sense relates to the verb to skirt, which means ‘to lie along the border of something’ or ‘to pass along or around something.’ To avoid or go around something, can also be to skirt, especially if it’s a controversial or risky thing.

Perhaps one of the most iconic images involving a skirt is the scene from The Seven Year Itch where Marilyn Monroe’s skirt blows up as she stands over a subway vent. You can watch the scene here:

A skirt is also anything resembling a skirt, particularly a strip of cloth that hangs down and covers up the lower part of a piece of furniture. Likewise, a skirt steak is a cut of beef that is thin and long, and from the lower rib area of the cow.

Skirt dates back to the late 13th century, in the form of the Middle English noun skirte, which meant ‘the lower part of a woman’s dress.’ It came into English from the Old Norse skyrta, which meant ‘shirt.’ Linguists believe that the sense shifted from shirt to skirt due to the long shirts worn by peasants in those days (likewise, the related Low German word Schört means ‘woman’s gown’ in some dialects). It can be traced back to the Proto-Germanic noun skurtjon (a short garment) and the Proto-Indo-European root sker– (to cut). It is related to the Swedish skjorta (skirt or kirtle), the Middle Dutch scorte and the Dutch schort (apron), and the Middle High German schurz and German Schurz (apron). It is also related to the English words shirt and short. The sense of border or edge (as in outskirts) dates back to the late 15th century, while skirt has been used figuratively to refer to women since the 16th century, though it only came to mean a young, desirable woman in the early 20th century. The verb, meaning ‘to border or form the edge of’ comes from the noun, and appeared around the year 1600. Meaning ‘to pass along the edge,’ and the related figurative senses, date back to the early 17th century.

See full definition
Learn more about skirt in our forums

Skirt in other languages