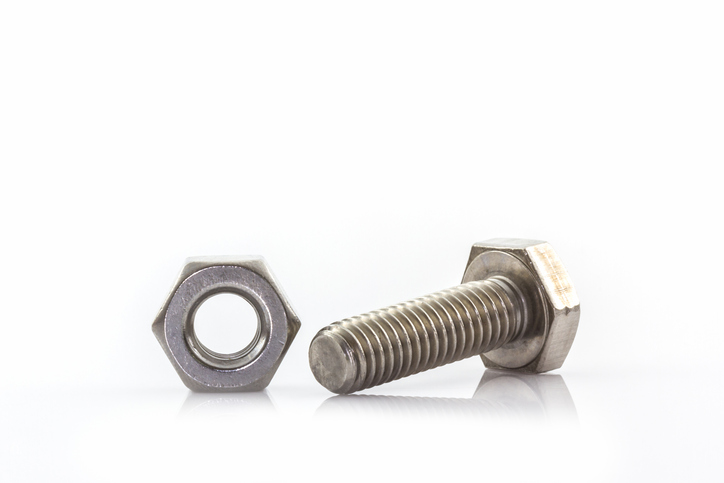 A bolt is a type of screw used to hold things together, a movable side bar used to lock a door and also the part of the lock drawn back by a key. Informally, a bolt is a sudden escape. It is also a thunderbolt or a lightningbolt. As a verb, to bolt means ‘to fasten with a bolt’ and also ‘to make a sudden escape.’ In US English, in relation to politics, it means to no longer support or participate in something. Informally, it also means ‘to swallow food or drink quickly.’

bolt upright: very stiff and straight. Example: “The loud noise woke me so suddenly, I shot bolt upright in bed.”

shoot your bolt: exhaust all your energy. Example: “The athlete was in the lead for the first two laps, but she ended up finishing last; she shot her bolt too early.”

Bolt is also the title of a 2008 animated movie feature a dog of the same name. You can watch the movie trailer here:

A bolt is also a length of fabric or woven goods as it comes on a roll from the loom (the device used for weaving fabrics.)

Although bolt means ‘escape’ in general, specifically when talking about horses, to bolt means ‘to run out of control.’ Example: “The loud bang of the car backfiring frightened the horse and it bolted.”

Bolt dates back to before the year 1000. Bolt (the spelling remains unchanged since then) originally meant ‘a short arrow with a heavy tip,’ as well as ‘a crossbow to shoot these arrows.’ It can be traced back to the Proto-Germanic bultas, and further back to the Proto-Indo-European root bheld- (to knock or strike). It is related to the Old Norse bolti, the Danish bolt, the Dutch bout and the German Bolz, all meaning ‘bolt.’ The sense expanded in Middle English to other short metal rods (especially when they had knobs at the end). A bolt of cloth took this name due to its long, narrow shape, and dates back to around the year 1400. Meanwhile, thunderbolt dates back to the mid-15th century, and lightning bolt to the early 16th century. Both are figurative senses related to the quick sharp flight and strike of an arrow. The verb comes from the noun and, meaning ‘to ping or make a quick start,’ dates back to the early 13th century. The sense ‘to lock or secure using a bolt’ is from the late 16th century, while the sense of leaving suddently is from the 19th century, a figurative sense related to runaway horses. To bolt down food dates back to the late 18th century.

See full definition
Learn more about bolt in our forums

Bolt in other languages