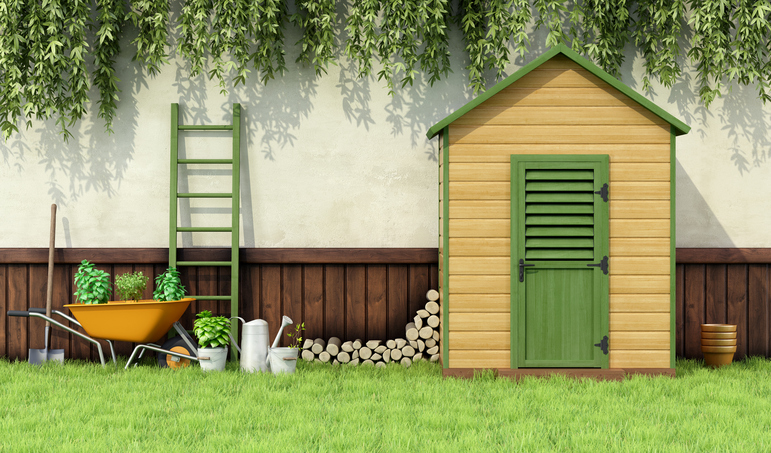 shed blood: literally to cause blood to flow from a wound, but also more generally to cause injury or death. Example: “Fortunately the two countries managed to resolve their differences without either side shedding any blood.”

shed light on something: as well as the literal sense mentioned above, this expression can be used figuratively to mean ‘to make something clearer, to explain.’ Example: “Could either of you kids shed any light on why the cookie jar is empty?”

Shedding a tear (or maybe several) is something we all do when we are sad. Here is a song about just that by Wet, Wet,Wet:

Don’t confuse shed with she’d, which is a contraction of “she had” or “she would.”

Originally, shed meant ‘to separate or divide something.’ In some English dialects it is still used in this way to mean ‘to separate lambs or calves from their mothers.’

Shed, as a verb meaning to cast off, dates back to before the year 950. The Old English verb scēdan (pronounced sheh-dan), a variant of sceādan, meant ‘to separate or part company,’ as well as ‘to discriminate or decide,’ and ‘to scatter or cast about.’ It evolved into the Middle English sched(d)en or shed(d)en before dropping the old verbal ending and settling on the form we use today. It can be traced back to the Proto-Germanic verb skaithan, and is related to the Old Saxon skethan, the Old Frisian sketha, the Middle Dutch sceiden, the Dutch scheiden, the Old High German sceidan and the German scheiden (all meaning ‘to part, separate or distinguish’), and the Gothic skaidan (to separate). Some linguists believe it originated in the Proto-Indo-European root skai- (to cut, separate or divide), but there is not enough evidence to know for sure. It has been used in reference to animals losing hair or feathers since around the year 1500, and to trees losing their leaves since the late 16th century. Its use in reference to taking clothes off is from the mid-19th century. The noun shed is unrelated, and dates back to the late 15th century. The Late Middle English shadde was probably a variation of shade, and meant ‘a light, temporary shelter.’ Its current meaning dates back to the mid-19th century.

See full definition
Learn more about shed in our forums

Shed in other languages