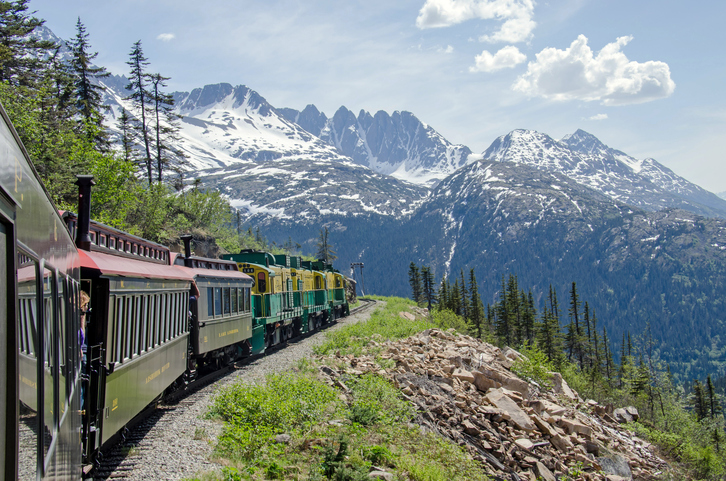 A train making its way along a mountain pass

As a verb, to pass means ‘to move past or go by’ or ‘to cross or go over.’ It also means ‘to experience or undergo.’ In reference to time, it means ‘to elapse’ or, in reference to a situation, state, or feeling, it means ‘to come to an end.’  When we’re talking about objects, to pass means ‘to transfer or convey’ or ‘to cause to go through or over or under somewhere.’ As a noun, a pass is the action of conveying or transferring something, especially the transfer of a ball between players on the same team in sports, but it is also a narrow road or path across part of a mountain range, written permission to enter somewhere, and a state of affairs. Informally, a pass is an action, gesture, or remark that is intended to be sexually inviting.

pass something on: convey information or knowledge, tell someone something. Example: “I’m afraid Mr. Peterson is out at the moment, but I can pass on a message, if you like.” or “These folk tales have been passed on from generation to generation for hundreds of years.”

pass out: faint. Example: “Dave can’t stand the sight of blood and always passes out as soon as he sees the tiniest drop.”

pass away, pass on: a euphemism for dying. Example: “Laura is upset because her grandmother passed away last night.”

pass something/someone over: disregard or ignore. Example: “Management passed Helen over for promotion.”

pass something up: fail to take advantage of something. Example: “I can’t believe you passed up the chance to go traveling for a year!”

Listen to the Bob Marley and the Wailers song “Pass It On,” from their 1973 Burnin’ album, here:

When talking about exams, to pass means ‘to complete successfully.’ Example: “Jessica was really worried about her history exam, but she worked hard and managed to pass it.” To pass can also mean ‘to approve,’ especially when talking about new laws being voted in. Example: “Congress has passed the bill.”

Although now rare as an adjective, in the Southern states of the US, pass is used to refer to strong alcoholic drinks, usually pass whiskey or pass wine. Interestingly, pass, pass-wine (with a hyphen), or passum is also an archaic word for wine made from raisins.

Pass, as a verb meaning ‘to go by something’ or ‘to cross over something,’ dates back to the late 13th century. It comes from the Old French verb passer, which in turn comes from the Vulgar Latin passare (to pass, walk or step), which evolved from the Latin noun passus (step or pace). It’s related to the Spanish pasar and the Italian passare, both meaning ‘pass,’ among many other Romance language words. The intransitive sense of the verb, meaning ‘to move forward or go on,’ as well as ‘to make your way,’ dates back to around the year 1300. It has been used figuratively with the sense ‘to undergo or experience’ since the late 14th century, and the exam-related meaning is from the early 15th century. To pass, meaning ‘to not want to do something,’ originated in card games in the mid-19th century, and the sports sense, ‘to throw or kick a ball to another player,’ is also from the mid-19th century. This last sense has expanded to mean ‘to hand anything over to another person’ since then. The noun, originally meaning ‘a mountain defile,’ dates back to around the year 1300, and comes from the Old French pas (step, track or passage). It can be traced back to the Latin passus, just like the verb. The noun meaning ‘permission to go into or through a place,’ usually written, first appeared in the late 16th century, and comes from the verb.

See full definition
Learn more about pass in our forums

Pass in other languages