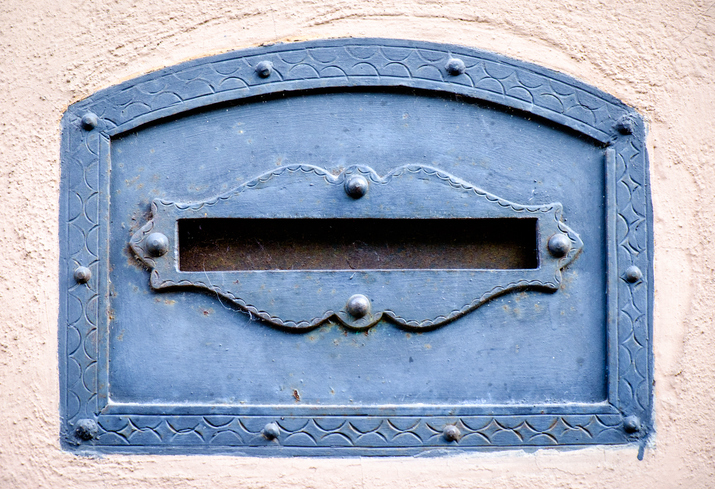 Letters go in the slot.

A slot is a thin and narrow opening for receiving something, such as a piece of paper or a coin, and also a place or position in a sequence, series, or schedule. Informally, it’s also a job opening. As a verb, to slot is to make a slot in something, to put something into a slot, or to fit someone or something into a schedule.

slot machine: a gambling machine operated by putting coins into a slot and pulling a lever or pressing buttons to spin wheels within the machine. If the wheels stop in the correct alignment, the machine releases a payoff into a receptacle at the bottom. Particularly in informal US English, such machines collectively are often just called slots, so you might say that someone has spent the weekend “playing the slots in Vegas,” for example. (Informally the old-fashioned versions of these machines, with just one lever at the side to pull, are called “one-armed bandits.”)

time slot: an allocated period of time for something. Example: “The TV schedulers were trying to work out the time slots for each show.”

In this clip from the popular TV show, Friends, Phoebe is playing the slot machines (or slots) at a casino in Las Vegas. She is upset because another woman is lurking, waiting for her to get tired of putting money into the machine, so that she (the other woman) can take over and stand a better chance of winning. (To lurk means ‘to lie in wait secretly’ and someone who does this is a “lurker.”):

Unrelated to the other meanings, in hunting, a slot is also the trail that an animal, especially a deer, leaves with its feet and, more generally, any track or trace (although this meaning is rare).

The first appearance of slot in English dates back to around the year 1300. Then, slot was ‘a bar or bolt,’ used to fasten a door or window. It came from the Middle Dutch or Middle Low German slot, and is related to many Germanic words, including the German Schloss (bolt, bar, lock or castle) and possibly the English word shut. It can be traced back to the Proto-Germanic root slut- (to close), from the Proto-Indo-European root klau- (hook or peg). This sense has pretty much disappeared. The meaning of slot we recognize today is completely unrelated. In Middle English, dating back to the early 14th century, slot meant ‘the hollow at the base of a person’s throat, above the breastbone.’ It comes from the Middle French esclot, ‘the hoofprint of a horse or deer.’ Its origin is not known, but many linguists believe that it came from the Old Norse slōð, meaning ‘track or trail.’ The original sense is now obsolete, but the figurative sense that evolved from it in the early 16th century, ‘a narrow opening into which something else can be put,’ became the most common meaning. The sense ‘coin opening in a machine’ is from the late 19th century, while ‘position on a list’ is from the mid-20th century. The verb comes from the noun, and dates back to the mid-18th century, meaning ‘to cut slots in’ or provide with a slot.’ All other senses evolved from this one in the 19th and 20th centuries. There was an older sense, ‘to stab someone in the base of the throat,’ from around the year 1400, but that sense is obsolete.

See full definition
Learn more about slot in our forums

Slot in other languages