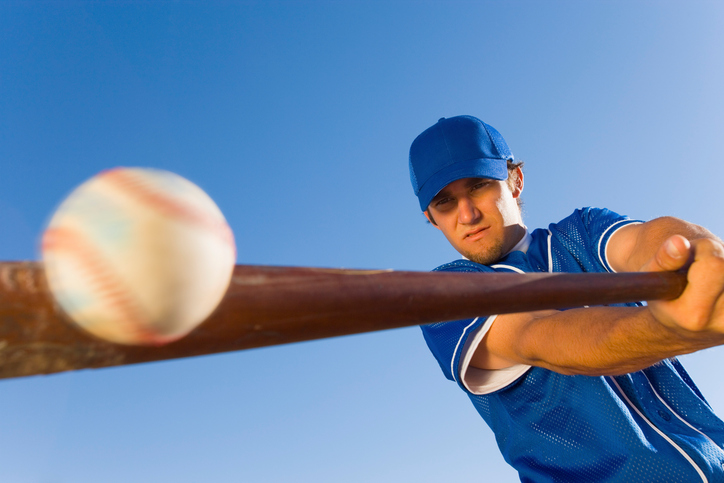 As a verb, to batter means ‘to pound something repeatedly or continuously’ and also ‘to beat someone up’ or ‘to abuse physically on an ongoing basis.’ As a noun, batter is a thin mixture of flour, eggs, and milk or water, used in cooking. In this sense, to batter means ‘to coat food with this mixture.’ In sports, like cricket or baseball, the batter is the player who swings the bat.

You may know that a traditional British meal is fish and chips. If you have ever had fish and chips in the UK, you will know that the fish is battered before it is fried. This video shows you how to make batter the way it is made in a British fish and chip shop:

Battering is the action of the verb batter and a battering ram is a device used to break open locked doors. These days it is likely to be a short steel cylinder used by the police to force their way into buildings when necessary. In ancient times, though, it would have been used in sieges to break open the doors of fortresses and, in its simplest form, would have just been a large log or tree trunk carried by several people, but could be a more complex siege engine.

Batter dates back to the early 14th century, as the Middle English verb bateren, meaning ‘to beat violently and rapidly,’ or ‘to strike repeatedly.’ It comes from the Old French batre, first seen in the 11th century, and can be traced back to the Latin verb battuere (to beat or strike), but the Latin word itself was probably borrowed from the Gaulish. Its origin is in the Proto-Indo-European root bhau-, ‘to strike,’ and it is related to the Welsh bathu (beat), the Old English words beadu (battle) beatan (to beat), and bytl (hammer or mallet), and of course the Modern French battre (to batter). The noun, meaning a thin mixture of flour, eggs and milk or water, dates back to the late 14th century. It is related to the verb, but did not come directly from it. Rather, it came from the Old French noun batteure (a beating), which comes from the Latin verb battuere. The other noun sense, the person who holds the bat in some sports, is unrelated, and is a formation of the word bat + er. It first appeared in the late 18th century.

See full definition
Learn more about batter in our forums

Batter in other languages