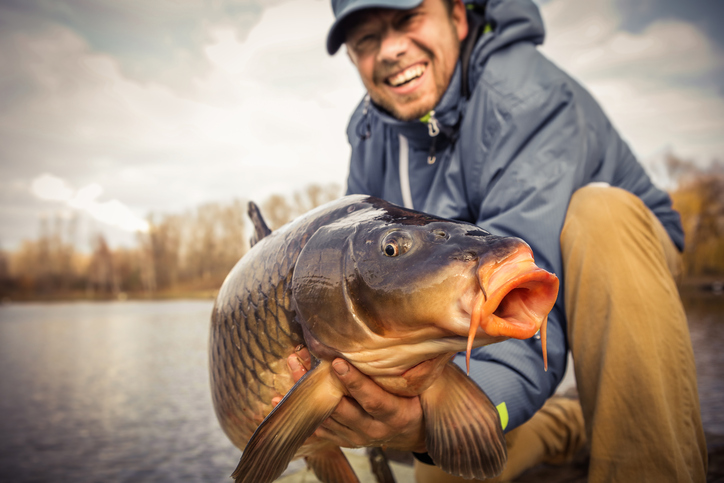 Bait is food, such as worms or bread or some substitute put onto a hook and used for fishing and, figuratively, anything used for tempting someone. In some parts of the US, a bait is a large quantity of something. As a verb, to bait means ‘to prepare a hook with bait,’ ‘to entice by deception,’ ‘to tease,’ and also ‘to torment with vicious remarks.’

cut bait (US): to give something up, usually when it’s not likely to work out. Example: “Marie has run for town mayor four times, and always lost. I think it’s time she cut bait.” The original expression, now rarely used, was fish or cut bait. It meant to decide to either go on or give up. Example: “Steve has been dating Andrea for six years, with no ring in sight. His grandmother keeps telling him to fish or cut bait, already.” Both these expressions originated in the fishing trade.

You can listen to the song “Bait a Hook” by American country music artist Justin Moore here:

Bait also means to set dogs on a restrained animal, often a bear, to bite and worry it. People used to do this for entertainment, but obviously it is illegal now.

A bait prank is a prank where someone leaves something somewhere making it look like it is easy to steal, but booby-traps it in some way, so that the thief does not get the object and ends up looking foolish. Here is a video of some people being caught out by a bait prank:

Don’t confuse bait with bate, which means ‘to moderate or restrain’ or ‘to lessen or diminish.’ It is bate that is used in the expression “with bated breath,” which means that you are holding your breath in anticipation of something.

Bait, as a verb that originally meant ‘to torment or persecute someone,’ dates back to the late 12th century, and could be spelled either baiten or beiten in Middle English. The meaning ‘to make a dog bite and torment an animal’ appeared in the late 13th century. The verb was also used, in Middle English, to mean ‘to put a horse or farm animal to graze or feed,’ ‘to eat food’ (referring to a person), and figuratively, ‘to feast your eye’ on something (late 14th century). It came into English from the Old Norse beita (to cause to bite) and can be traced back to the Proto-Germanic baitjan and the Proto-Indo-European root bheid– (to split). It is related to the Old English bætan (to cause to bite), the Old High German beizzen (to bait), the Middle High German beiz (hunting) and the German beizen (‘to hawk,’ ‘to cauterize’ or ‘to etch’), as well as the English bite. As a noun meaning ‘food put on a hook or trap to attract animals or fish,’ bait (bait or beit in Middle English) dates back to the late 13th century. It does not come from the verb, but has the same origin. The other meaning of the verb, which is more common today (to put food on a fishing hook or animal trap) dates back to around the year 1400, and comes from the noun.

See full definition
Learn more about bait in our forums

Bait in other languages