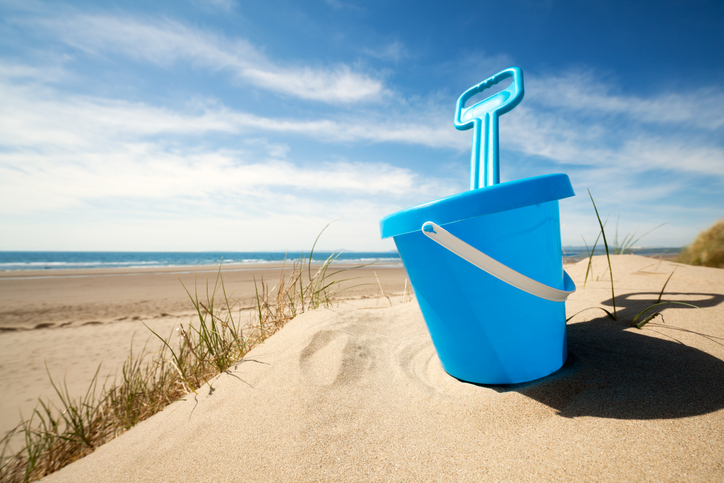 A bucket is a round container with a flat bottom, an open top, and a handle, usually used for carrying liquids or other things. Anything with that shape can also be called a bucket, as well as the amount held by one. Informally, usually in the plural, large amounts of something (usually rain or tears) can be referred to as buckets. As a verb, often followed by out or up to bucket means ‘to carry or transfer in a bucket,’ although this sense is now rare, and, informally, usually followed by along, it means to ‘hurry,’ especially ‘to drive or to move really fast.’ In British English, often followed by down, to bucket means “to rain very heavily.”

kick the bucket: die. Example: “Did you hear about the old guy down the road? Apparently he kicked the bucket last night.” It is thought this saying comes from an unrelated meaning of bucket, as a beam that things, often slaughtered animals, were hung from.

bucket list: related to the meaning above, this is a list of things someone wants to do before they die. Example: “When my aunt was diagnosed with cancer, she made a bucket list and tried to do as many things as she could before she got too sick.”

bucket seat: a seat in a car or plane that is contoured and designed for just one person, rather than a long bench seat. Example: “The SUV has bucket seats in the front row and a bench seat in the back.”

A popular online craze in 2014 was the ALS Ice Bucket Challenge, which saw people having a bucket of iced water poured over their heads. That might seem rather strange, but they were doing it for a good cause, which was to raise money (and awareness) for ALS or amyotrophic lateral sclerosis, also known as motor neurone disease. Here you can see a video of celebrities taking part in the challenge:

There is an old children’s song called “There’s a Hole in My Bucket.” You can listen to it here:

You might not readily see a connection between politics and buckets, but the world of British politics can be rather strange. Although most elected Members of Parliament come from one of the major political parties in the UK, that doesn’t stop independent candidates from challenging them, and some of those independent candidates are a little eccentric. One who attracted international attention in a UK General Election was a man who stood against the British Prime Minister, Theresa May, in her constituency seat of Maidenhead. The gentleman in question calls himself Lord Buckethead and was, indeed, wearing a bucket on his head, as you can see in this picture tweeted by UK newspaper, The Guardian:  (for anyone who is unsure, the woman in orange, standing next to Lord Buckethead, is Theresa May).

Bucket dates back to the mid-13th century. Some linguists believe that the Middle English noun buket was formed by merging the Old English word bucc (a variant of the noun būc, which meant ‘vessel’ or ‘belly’) and the Old French diminutive suffix -et. Others point to the Anglo-French buquet (bucket or pail), from the Old French buquet as signs that the term evolved in French and then came into English (in this case, the ‘buck’ part came from a Frankish or other Germanic source). In either case, the root of the word can be traced back to the West Germanic buh-, possibly a variation of the Proto-Indo-European beu- or bheu-, meaning ‘to grow or swell.’ It is related to the Dutch buik, the Old High German buh and the German Bauch, all meaning ‘belly.’ The verb comes from the noun, and first appeared in the late 16th century. The expression kick the bucket dates back to the late 18th century, but its origin is unclear. It may have come from an unrelated meaning of the Old French buquet (the beam slaughtered animals were hung on), or from the idea of committing suicide by hanging while standing on a bucket. A third option is from Norfolk dialect, where bucket man also mean ‘pulley.’

See full definition
Learn more about bucket in our forums

Bucket in other languages