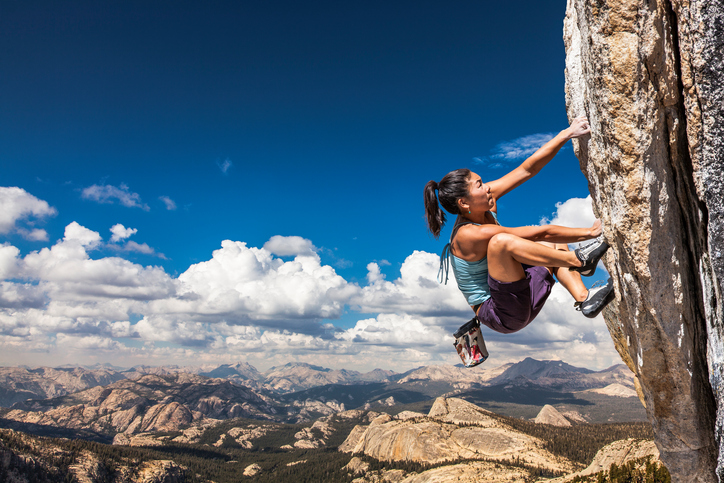 To clutch means ‘to seize or hold tightly.’ As a slang term, in US English, usually followed by “up,” it means ‘to panic and become tense.’ This use was more common a few decades ago. A clutch, as a noun, is a tight grip or hold and, often in the plural form clutches, it means ‘power or control that is difficult to escape.’ In US English, clutch can also be used as an adjective to refer to something done in a critical situation or something or someone that can be depended on in a crucial situation.

clutch at: try to grab. Example: “Oliver clutched at a branch, but missed and fell anyway.”

clutch bag: a small bag that has to be carried (or clutched) in the hand, rather than suspended from a strap. Example: “Monica was wearing a little black dress, with gold shoes and a gold clutch bag.” This is sometimes shortened to just clutch.

In US English, a clutch moment in sports is a crucial moment, one where the game can be won or lost. Here is a video showing a collection of clutch moments:

A clutch is also the collective noun for the eggs laid by a bird or the baby birds that hatch from those eggs. By extension, clutch is sometimes used figuratively for a group of anything.

If you are talking about a vehicle, the clutch is the device that allows power from the engine to be transmitted or disconnected from the gears or the pedal you use to make this happen (the one on the left that you press down when you want to change gears).

Clutch dates back to around the year 1000. The Old English verb clyccan (pronounced clüchan, with the u sound like in French), which later became the Middle English clucchen or clicchen, originally meant ‘to bring together,’ ‘bend your fingers’ or ‘clench.’ It can be traced back to the Proto-Indo-European root klukja-, and is related to the Swedish klyka (clamp or fork) and the English verb cling. The meaning ‘to grasp’ appeared in the early 14th century, while ‘to seize with claws or clutches’ is from the late 14th century. The sense ‘to hold tightly’ dates back to around the year 1600. The noun comes from the verb, and dates back to around the year 1300. The Middle English noun cloche evolved from the Old English verb and the noun cloke, which meant ‘claw.’ The original meaning, ‘a claw, grip or grasp,’ evolved to include ‘a grasping hand’ in the early 16th century, leading to the more common meaning ‘tight grasp’ in the late 18th century. The automotive sense appeared in the early 19th century, related to machines rather than cars, and was first used for cars in the late 19th century. The meaning now common in sports, ‘moment when heroics are needed,’ dates back to the 1920s. Finally, the unrelated clutch, meaning ‘the eggs laid by a bird or the chicks that hatched from these,’ dates back to the early 18th century. It is a variant of the Southern English dialect noun cletch, and evolved from the Middle English verb clekken (to hatch). It is probably of Scandinavian origin, possibly the Old Norse klekja (to hatch), and is related to the Scots cleck (to hatch).

See full definition
Learn more about clutch in our forums

Clutch in other languages

Intermediate+ Word of the Day: screw