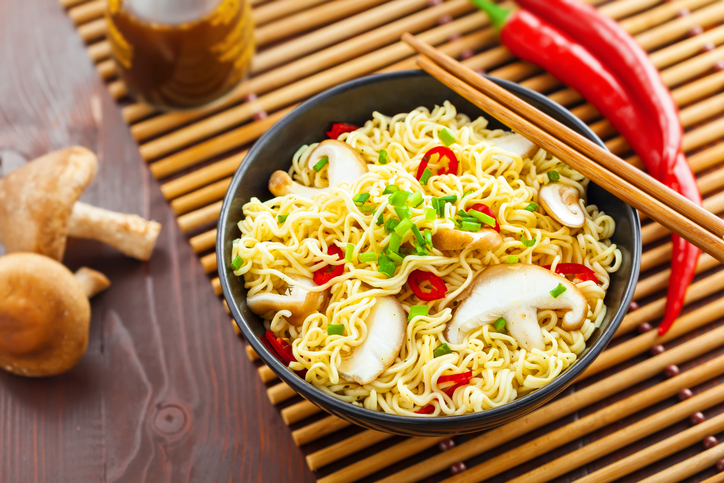 A noodle is a dried strip of egg or other dough, a bit like pasta, that is boiled and mostly served in soups or with stir fries; it is very common in Asian cuisine. As a slang term and, figuratively, noodle means ‘head’ and it also describes a foolish person. Used originally as a jazz term, to noodle means to play music in improvisatory way, often as a warm-up exercise. Figuratively, in US English, it also means ‘to experiment,’ ‘to think creatively,’ and ”to play.’

noodle around: play, experiment, or improvise. Example: “The meeting was an opportunity for the team to noodle around and see if anyone came up with any good ideas.”

Asian food is very popular. Here is a video showing you how to make a Vietnamese chicken noodle soup:

You can also use the word “noddle” as a slang term for the head. This is more common than noodle in UK English.

Noodles are usually made from softer flour than Italian pasta. This means that noodles tend to be softer than pasta, which has a firmer, more elastic texture. In English we don’t use the words noodles and pasta interchangeably. We always call the Asian type noodles. Usually we call the Italian type pasta, but sometimes we can say noodles too in this context. In terms of linguistic differences, noodles are countable, whereas pasta is not (this is also true of types of pasta, such as spaghetti or tagliatelle).

See full definition
Learn more about noodle in our forums

Noodle in other languages