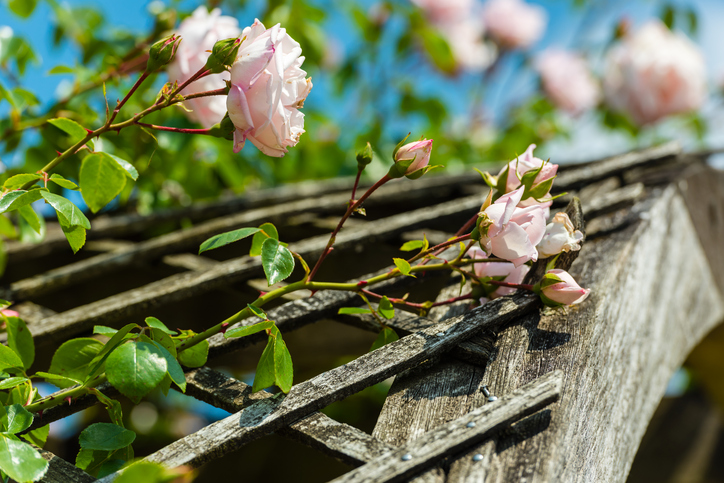 Roses twining around a trellis

A twine is a strong thread made of several threads twisted together and a knot or tangle. As a verb, to twine means ‘to twist something together with something else,’ ‘to insert with a twisting motion,’ ‘to form by twisting together.’ It also means ‘to wrap‘ and, usually followed by around or about, ‘to clasp something around something else.’

You can listen to Lightnin Hopkins singing his song “Ball of Twine” here:

In Scottish English, to twine can also mean ‘to separate.’ It is a variant of to twin, which used to have the meaning of ‘to separate’ in English, but is now archaic, except in Scotland.

Twine is also the name of an open-source, free software tool for telling non-linear stories. It is popular for creating hypertext narratives and games, and you don’t need to know any programming language to use it. Intrigued? We were! You can find out how it works on their website, here.

Twine dates back to before the year 900. The Old English noun twīn, and later the Middle English noun twine, literally meant ‘a double or twisted thread.’ It can be traced back to the Proto-Germanic noun twiznaz (double or twisted thread), and originated in the Proto-Indo-European root dwo-, which meant two. It is related to the Old Norse tvinni, the Dutch twijn, the Low German twern and the German zwirn (twine, thread), and through the PIE root, to the English words two, twin and double, among others. The Middle English verb twinen (now twine) dates back to around the year 1300. It comes from the verb, but was also influenced by the Old Norse tvinna (to double). It originally meant ‘to twist strands together to form twine,’ and the meaning ‘to twist around something’ appeared in the late 14th century.

See full definition
Learn more about twine in our forums

Twine in other languages