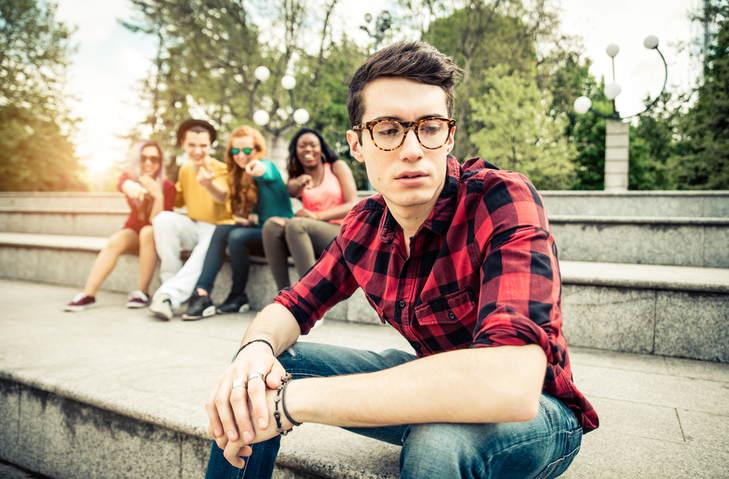 No one likes being bullied.

A bully is someone who intimidates, bothers, mocks, or hurts others, usually smaller or weaker people. The verb to bully is what bullies do, intimidate, bother, mock, and hurt others. It also means ‘to be arrogant and overbearing.’ However, despite its negative connotations, in US English, as an adjective, and informally, bully means ‘very good’ or ‘high spirited,’ though this use is now dated. As an interjection, usually in the expression “bully for you” it means ‘well done!’ (in UK English, this expression is now only used ironically).

Bullying is part of every culture and something that is beginning to be taken much more seriously. People often used to think that bullying was part of growing up and would teach their children the mantra “Sticks and stones may break my bones, but words will never hurt me.” Of course, words do hurt people, sometimes much more than physical injuries. These days most schools have specific policies regarding bullying and will intervene much earlier if they are made aware of possible bullying. However, bullying has also become harder to control. Whereas once, if a child was being bullied at school, he/she would at least be safe from his/her tormentors at home, now children are often bullied relentlessly on social media. One case that got everyone talking about bullying, was that of Amanda Todd in Canada, who tragically took her own life after someone persuaded her to share a topless photograph of herself. That person then shared the photo with all Amanda Todd’s friends, which led to her being bullied and teased by everyone at her school. Amanda shared a video on YouTube, saying how she felt about the bullying. The video went viral after her death. You can see it here:

Bully or bully beef is tinned or pickled beef.

Interestingly, despite its current negative meanings, the word bully originally meant ‘darling’ or ‘sweetheart.’ It was a term of endearment that you could use for both men and women. Then the meaning changed a little bit; now only applied to men, it meant ‘a gallant’—someone with a bit of swagger about him, someone that others would admire. You might find this meaning if you ever read Shakespeare in English, normally used like a title in front of someone’s name—for example, Bottom the Weaver, in A Midsummer Night’s Dream, is referred to as ‘O sweet bully Bottom.’ Of course, men like this could be a bit larger than life and perhaps demand a lot of attention and, because of this, might make others feel small and insignificant. So, the meaning gradually changed over time to the meaning we have today.

Bully dates back to the 1530s. It was originally another way to say ‘sweetheart,’ and could be applied to both sexes. It came into English from the Dutch boel, which could mean either ‘lover’ or ‘brother,’ and was probably a diminutive of the Middle Dutch broeder (brother). As such, it can be traced back to the Proto-Germanic brothar, and the Proto-Indo-European root bhrater. It is related to the Old Norse broðir, the Danish broder, the Old Frisian brother, the Dutch broeder, the German Bruder and the Gothic bróþar, as well as the Latin frater, and almost every other European language word for brother. The meaning of bully deteriorated during the 17th century. It quickly came to be used only for men, meaning ‘fine fellow,’ but soon devolved further, to ‘blusterer,’ and then to ‘harasser of the weak,’ perhaps due to its similarity to the word bull. Another sense of the word bully (now lost), appeared around the year 1700: a ‘protector of prostitutes,’ which we would now call a pimp. This was perhaps a combination of its original meaning of lover with the newer sense. The verb comes from the noun, and dates back to the early 18th century. The expression “bully for you!” dates back to the late 17th century, and preserves the positive connotation (even if it is now mostly ironic).

See full definition
Learn more about bully in our forums

Bully in other languages

Intermediate+ Word of the Day: push