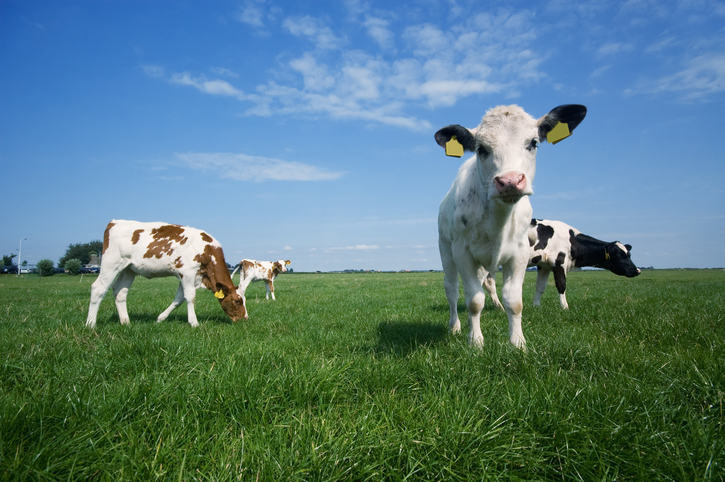 A calf is a young domestic cow, or the young of other animals like elephants, seals, and whales. In clothing, calf refers to calfskin leather. Informally, a silly man or boy can also be called a calf, although this meaning is rarely heard now. Unrelatedly, a calf is also the fleshy part of the back of the leg below the knee.

in calf: pregnant, when we are talking about a cow. Example: “The farmer saw that most of the cows were in calf.”

kill the fatted calf: to prepare a feast in celebration of someone’s return. The expression comes from the story of the prodigal son in the Bible.

Figuratively, an iceberg breaking off a glacier can also be called a calf. The related verb calve means ‘to give birth to a calf’ or, when we are talking about a glacier, to shed a mass of ice. You can see that happening in the Perito Moreno glacier in Argentina in this video:

We are always interested in your well-being here at WOTD, so here is a workout video showing you some great exercises for toning your calves:

Calf dates back to before the year 900. The Old English cealf, cælf or calf (the spelling was standardized as calf in Middle English) originally meant ‘a young cow,’ and can be traced back to the Proto-Germanic kalbam, and may have originated in the Proto-Indo-European root gel-, meaning ‘to swell’ (as the womb of a pregnant animal swells, and the offspring is, figuratively, the swelling). It is related to the Saxon kalf, the Old Norse kalfr, the Middle Dutch calf, the Old High German kalb, the German Kalb and the Gothic kalbo, all meaning ‘calf.’ It has been used to describe the young of other animals since the 13th century, and the leather of a calf since the early 18th century. Its figurative use for icebergs dates back to the early 19th century. The unrelated noun calf, meaning ‘the fleshy part of the lower leg,’ dates back to the early 14th century. It came into English through the Old Norse kalfi, but its origin is unknown. It is thought that it may come from the same Proto-Indo-European root, gel-.

See full definition
Learn more about calf in our forums

Calf in other languages

Intermediate+ Word of the Day: dent