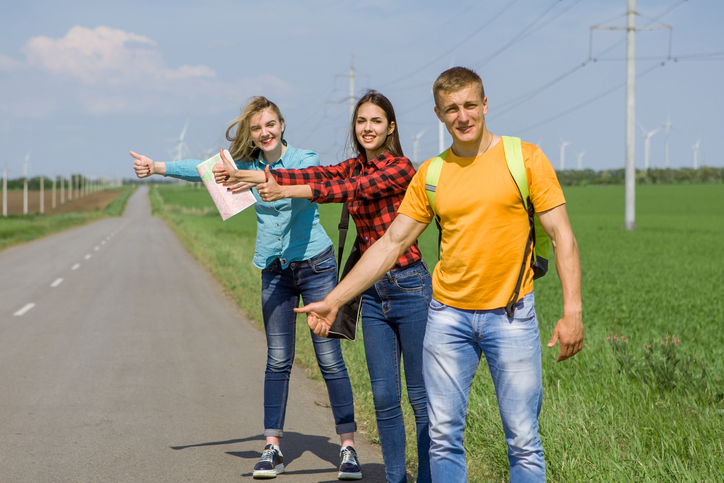 To hitch means ‘to tie or fasten something with a rope or strap’ and, more specifically, to put a harness on an animal and tie it to a vehicle. Hitch also means ‘to move up or raise.’ As an informal term, if you get hitched it means that you marry someone. As a noun, a hitch is a knot to hitch something. An unexpected problem can also be called a hitch. Informally, in US English, a hitch is also a period of military service, though this use is now considered outdated.

hitchhike: to get a ride in someone else’s vehicle, usually by standing at the side of the road with your thumb out or holding a sign saying where you want to go. Example: Steve hitchhiked all over Europe in his younger days.” The verb is also often shortened to just hitch. Example: “I didn’t have a car, so I hitched all the way to Edinburgh.”

hitchhiker: someone who is hitchhiking. Example: “I pulled over to pick up a couple of hitchhikers.”

The Hitchiker’s Guide to the Galaxy is a 2005 movie, based on the Douglas Adams’ book of the same name. You can see the trailer here:

We feel we should point out that the books (a trilogy of five [yes, we know]) are much better than the movie. The books were actually based on a radio series, originally broadcast on the UK’s BBC Radio 4, which many people claim was better than the books. There was also a 1980s TV adaptation. Some people liked that.

A hitch can also be a short, jerky movement or a limp in a horse’s pace.

The hitch-kick or hitch and kick is a technique in long-jumping. You can see how to do it here:

Hitch dates back to the early 15th century. The late Middle English verb hytchen is of unknown origin, though some speculate that it may be a variation of the Middle English verb icchen, which meant ‘to move with jerks or pauses,’ as well as ‘to stir,’ around the year 1200, and later disappeared. The connection may be in the idea of jerking upwards to put pants on. The meaning ‘to fasten or become fastened,’ especially with a hook, dates back to the mid-16th century, and was originally nautical. It has been used figuratively to mean ‘to marry’ since the mid-19th century, based on the early 19th century expression “to hitch horses together,” which meant ‘to get along,’ and was often used about married couples. It has been used as a short variation of hitchhike since the 1930s. The noun comes from the verb and, meaning ‘a limp or hobble,’ or ‘an abrupt movement,’ dates back to the mid-17th century. The figurative sense of obstruction or obstacle appeared in the early 18th century, while the military sense was common during the 19th century.

See full definition
Learn more about hitch in our forums

Hitch in other languages

Intermediate+ Word of the Day: dig