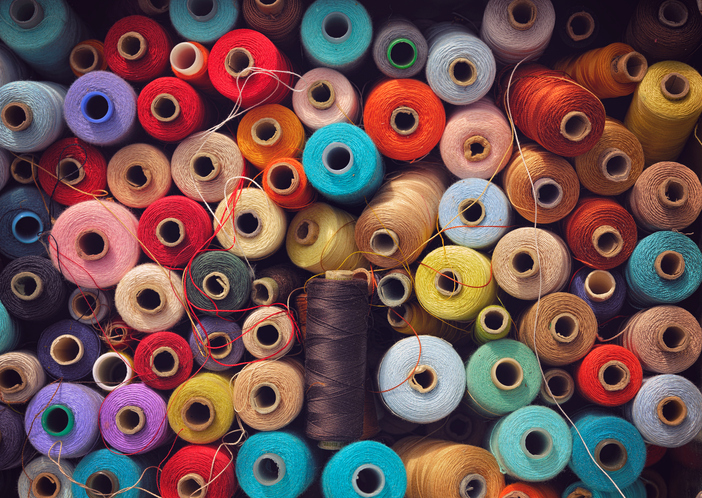 A thread is a long, thin cord or fiber. In a narrative or in speech, it is something that connects parts of a sequence, running through the whole thing, you might know that meaning from emails or Internet posts as well, meaning ‘a series of messages dealing with the same topic.’ Threads, always in the plural, is an informal term for clothes, although this is a little dated now. As a verb, to thread means ‘to fix something on a thread’ and ‘to pass the end of a thread through the eye of a needle’ or ‘to place thread in a sewing machine.’ In film, it means ‘to pass tape through a narrow opening.’ Figuratively, it means ‘to make your way around things or people that get in the way.’

threadbare: an adjective used to describe any material (clothes, furniture covers, carpets, etc.) when it has become thin and worn from use. Example: “I really need to get a new couch; my old one is absolutely threadbare now!”

As you may know, some people pluck their eyebrows to get rid of any stray hairs and make them look tidier. Many people use tweezers to pluck out individual hairs, but in recent years a technique known as threading has become very popular. Threading, as the name suggests, uses threads twisted together to remove the hairs. The advantage of the technique is that it makes it possible to remove several hairs at a time. You can see how it is done here:

A thread is also the ridge that spirals along the length of a screw, allowing it to be twisted firmly into position.

In Hinduism, a sacred thread is presented to someone as part of the upanayana ceremony. You can read more about upanayana here.

Thread dates back to before the year 900. The Old English noun þrǣd (that funny letter at the begining is called a thorn, and is pronounced like a th, so the Old English pronunciation of thread was the same as it is now) became the Middle English threed (also pronounced like we do thread) before taking the modern spelling. It originally meant ‘fine cord (especially when twisted),’ and can be traced back to the Proto-Germanic root thredu- (twisted yarn), and further back to the Proto-Indo-European root tere- (to rub or turn). It is related to the Old Saxon thrad, the Old Frisian thred, the Middle Dutch draet, the Dutch draad, the Old High German drat, the German Draht and the Old Norse þraðr, all meaning ‘wire’ (that Old Norse word, by the way, is pronounced thrathr). It has been used to mean ‘the spiral of a screw’ since the mid-17th century, and the plural, threads, became slang for clothes in the US in the 1920s. The verb comes from the noun and, meaning ‘to put thread through a needle,’ first appeared around the early 14th century, as the Middle English threeden. There was an Old English verb related to thread, þrawan (thrawan, meaning ‘to twist’), but it is not considered the same verb as thread. To put something on a thread is an expansion of the original meaning, from the late 14th century, and the figurative senses developed from here.

See full definition
Learn more about thread in our forums

Thread in other languages