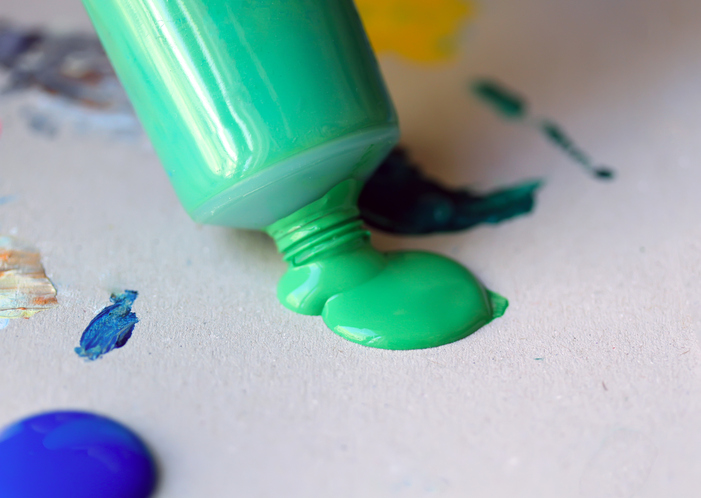 Paint oozing from a tube

To ooze means ‘to flow or pass slowly,’ when we are talking about a liquid or moisture or a wet substance, and also ‘to let out gradually.’ More generally and not only regarding liquid, to ooze means ‘to appear or disappear gradually.’ To show or display some quality is also to ooze, especially when the quality seems false or showy. As a noun, ooze is the act of oozing, something that oozes, or wet mud or slime (especially at the bottom of a river or the sea). It is also an infusion of oak used for tanning clothes.

Listen for the lyric “Sliding through Victorian tunnels where green moss oozes from the pores.”

As a geological term, ooze refers to mud that covers parts of the ocean floor and that is mainly made up of the shells of single-celled organisms.

Ooze dates back to before the year 1000. The Old English noun wōs meant ‘juice or moisture,’ while another Old English noun, wase, meant ‘soft mud or mire.’ Linguists disagree on whether ooze developed primarily from one or the other, but agree that the two merged at some point. In Middle English two spellings are still recorded, wose and wase, but wose was much more common. The spelling we know today was fixed in the mid-16th century, near the end of the Great Vowel Shift in the English language. Both Old English nouns come from the Proto-Germanic waison, and can be traced all the way back to the Proto-Indo-European root wes- (wet). Ooze is related to the Old Saxon waso (wet ground, mire), the Old Norse veisa (pond of stagnant water) and the Middle Low German wose (scum). The verb probably comes from the noun, but also dates back to before the year 1000. The Old English verb wesan became the Middle English wosen. Though it lost the ending around the late 14th century, the modern spelling was fixed in the late 16th century.

See full definition
Learn more about ooze in our forums

Ooze in other languages