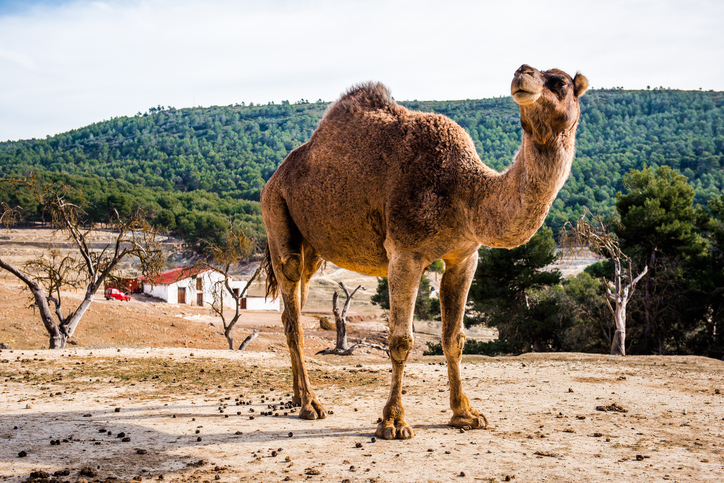 A hump is a rounded lump that sticks up, like the one on the back of a camel. A low rise over the ground’s surface is also called a hump. As a verb to hump means ‘to raise the back as to form a hump,’ like some animals do when they’re scared or annoyed. Informally, in US English, it means ‘to hurry or exert yourself’ and, as a slang term, it means ‘to have sex.’ Related to this last sense, as a noun, hump is also slang for ‘sexual partner’ or ‘an act of sex.’ In UK English, to hump, sometimes followed by ‘around’ or ‘about’ can mean ‘to heave’ or ‘to carry’ something heavy.

the hump (UK): a bad mood. Example: “My husband has the hump because I forgot to buy milk when I went shopping.”

over the hump: over the worst part of something. Example: “It is a lot of work, but I think we’re over the hump now.”

speed hump: a low hump in the road, designed to make traffic slow down. Example: “The council is going to put speed humps along this road, because the residents have complained about speeding cars.” Speed humps are also called “speed bumps” and, in the UK, they are figuratively known as “sleeping policemen.”

Of course, camels are used to transport people and goods in desert regions, as they are able to withstand the harsh conditions. As you can imagine, that means they feature heavily in movies set in such areas, including the 1962 classic biopic Lawrence of Arabia. You can see the movie trailer (with plenty of camels) here:

The related word humpback can be used as a noun, for various things that have a humped back, or as an adjective to say that something has a humped back or is shaped liked a humped back. For example, the humpback whale (Megaptera novaeangliae) or a humpback bridge, which is a bridge that forms a hump.

Hump dates back to the late 17th century, though it was originally only found in the compound hump-back. The first records of hump as a noun on its own date back to around the year 1700. Some linguists believe that the compound originated first, and hump broke off from it to take on its own meaning, while others think that hump may have been around before, but was not common, and therefore not recorded. In either case, it is thought to have come into English from the Dutch homp (lump), and can be traced, through the Middle Low German hump (bump), back to the Proto-Germanic root hump– and the Proto-Indo-European root kemb- (to turn, bend, change or exchange). It replaced the Old, Middle and Modern English crump, which had the same meaning. It is distantly related to the English word change (from the same Proto-Indo-European root). The figurative sense, ‘the critical point in an endeavor’ (as in the expression over the hump) dates back to the very early 19th century, and is thought to have originated in railway yards, where there were humps some cars needed to be pushed over. The verb comes from the noun and, meaning ‘to bend or raise into a hump,’ dates back to the mid-19th century. The sexual meaning actually appeared earlier, in the 18th century, though it may be older. Its exact origin is unknown.

See full definition
Learn more about hump in our forums

Hump in other languages