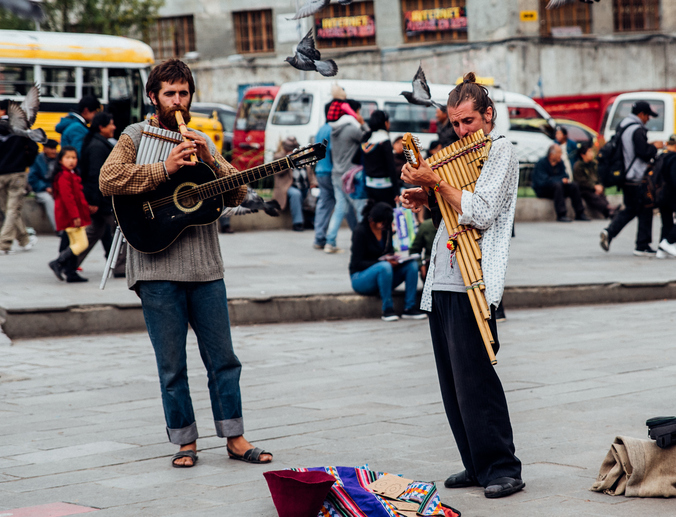 You can find folk music all over the world.

Folk, usually in the plural form folks in US English but more commonly as folk (but used with a plural verb) in UK English, means ‘people in general.’ It can also mean ‘people of a particular group,’ when used with an adjective. In sociology, folk (used with a plural verb) are people considered as the ones who carry on tradition and culture. Informally, folks (in both US and UK English) also means ‘parents’ or ‘family.’ As an adjective, folk refers to anything that comes from the common people or relates to their traditions. This is where folk, the style of music comes from; it is music made by the common people.

folklore: the traditional stories or customs of the people. Example: “The researcher was writing a book on Celtic folklore from the British Isles.”

You may remember the phrase “That’s all folks!” from the end of the Looney Tunes cartoons. You can see it here:

Folk music, sometimes shortened to just folk, is traditional music of the sort people with no musical education would always have made in their homes. Often it would be about local or personal events or local places, traditions, or legends, so obviously it can vary quite a lot from one country or even one region to another. It is a style of music that has remained popular and there are many folk festivals around the world, including one that has been running since 1965 in the small seaside town of Sidmouth in Devon, in South West England. You can see a short video clip from a recent festival here:

Folk dates back to before the year 900. The Old and Middle English noun folc could mean ‘common or lay people,’ ‘men,’ ‘a people, nation or tribe,’ ‘a multitude,’ ‘an army’ or ‘a troop.’ It comes from the Proto-Germanic folkam, and further back to the Proto-Indo-European root pele– (to fill). It is related to the Old Saxon folc, the Old Frisian folk, the Middle Dutch volc, the Dutch volk, the Old High German folc and the German Volk, all of which mean ‘people,’ as well as the Old Norse folk (‘people,’ but also also ‘army or detachment’), the Lithuanian pulkas (crowd), and the Old Church Slavonic pluku (division of an army). Through its PIE origin, it is also related to the Greek plethos (people or multitude) and the Latin plebes (the populace, the common people), making it indirectly related to the English word people. Folk was always considered a collective noun until around the 15th century, when it developed a plural, folks, which is more common in the US than in the UK. The adjective use dates back to before the year 900, but only as part of compounds, such as folccwide (popular saying) o folcgemot (town meeting). The modern use of folk as an adjective dates back to the mid-19th century. The use of folks as an informal way to say family developed from a shortened form of kinfolk (early 19th century; kin meant family, and folk people),

See full definition
Learn more about folk in our forums

Folk in other languages