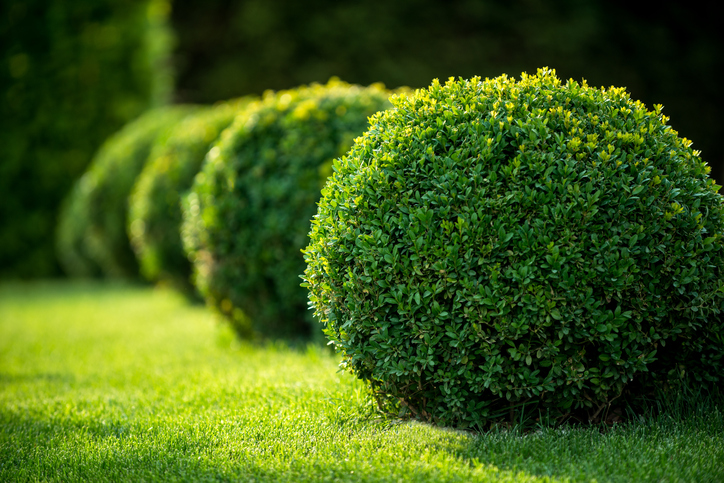 A bush is a low plant that grows near the ground or several shrubs that look like a single plant. Anything that resembles this, like a thick bit of hair, can be called a bush. An unclear area covered with plants is also a bush and the bush is used to talk about an uncultivated area, usually in a hot country, where few people live. As a verb, to bush means ‘to branch or spread like a bush’ or ‘to protect with bushes.’

beat around (or: about) the bush: avoid getting to the point. Example: “Stop beating about the bush and tell me what you really want!”

go bush (Australian): literally this means to escape or disappear into the bush, but as a slang term it means to go wild. Example: “Scott’s friends are worried about him; he’s been acting pretty strangely lately and they think he might be going bush!”

Bush is, of course, also the name of two former US presidents. George H. W. Bush, the 41st President of the United States, appears as a character (voiced by an actor) on an episode of The Simpsons. You can see a clip from the episode here:

In metallurgy, a bush is a metal lining put into an orifice to stop it being worn by friction.

As a slightly vulgar slang term, bush is used to mean pubic hair, especially when it is thick and abundant.

Bush dates back to before the year 1000. The Old English bysc (later busc and, in Middle English, busshe) meant ‘a many-stemmed, woody plant.’ It came into English from the West Germanic busk (bush or thicket), but was also influenced by or combined with words of Scandinavian origin. It is related to the Old Saxon and Old High German busc, Dutch bosch, bos, German Busch, as well as to the Old Norse buskr and the Danish busk (all of these mean ‘bush’). It is also related to the Old French busche and the Anglo-Latin bosca (firewood), as well as the Italian bosco, the Spanish bosque and the French bois (woods or forest), which all come from the Medieval Latin busca. Interestingly, it is believed that the Medieval Latin source was also West Germanic, and the origin of the word before then is unknown. It has been applied to uncleared, rural areas since the mid-17th century (starting in the British American colonies), possibly due to the influence of the Dutch bosch, which had that sense, since this meaning appeared first in former Dutch colonies. It has been used colloquially for hair resembling a bush since the late 16th century, and the colloquial sense ‘pubic hair’ (especially a woman’s) has been around since the mid-18th century. The expression “beat around (or about) the bush” dates back to the mid-15th century, though originally it was something done physically to get birds to fly out for hunting. The verb comes from the noun, and dates back to the 14th century.

See full definition
Learn more about bush in our forums

Bush in other languages