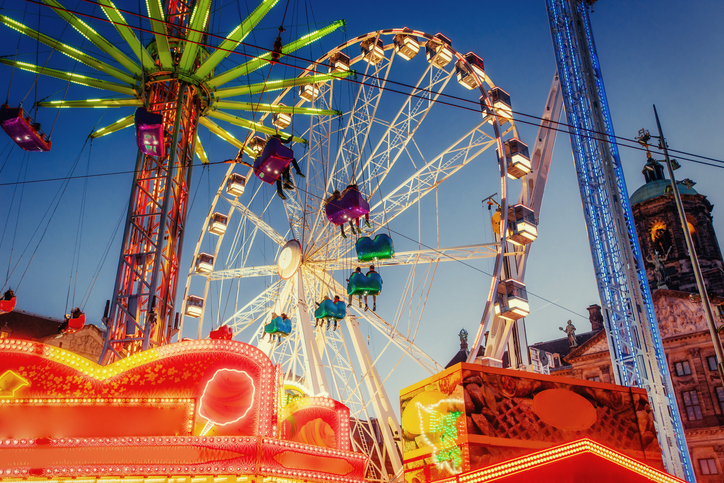 If something is fair, it means that it’s ‘honest, just and free from bias.’ Fair also means ‘moderate,’ as in neither too good or too bad, and ‘somewhat large.’ If we are talking about color, it means ‘light, not dark’ and, when we refer to the weather, it means ‘bright, without clouds.’ It also means ‘attractive,’ and ‘having good conditions’ or ‘promising.’ As an adverb, it means ‘in an honest way.’ Unrelatedly, a fair is an exhibition and sale of articles, a place where buyers and sellers meet in an appointed place. It can also be an exhibition of farm products or livestock, usually held annually by a county or state (for this last meaning, the word fair is most commonly used in US English; the word usually used in UK English is show).

fair and square: in an honest and just way. Example: “The tennis player was disappointed to lose her match, but her opponent had won fair and square.”

bid fair: seem likely. Example: “The expedition bids fair to be a success.”

fair’s fair: let’s be fair about this. Example: “You’ve had your turn, now let me have mine. Fair’s fair!”

A fair, or funfair, is also a type of entertainment with rides and amusements, which often travels from place to place. There was a British folk and soft rock band called Fairground Attraction in the late 1980s. You can listen to their 1988 hit “Perfect” here:

In Australian English, fair dinkum is an informal expression used to emphasize the truthfulness of something you have said or to question something someone else has said (a bit like saying “Really?”). Example: “Kangaroos have got through the fence and they’re all over Bruce’s garden.” “Fair dinkum?”

It is quite common in English to say fair enough to mean that you accept what someone else has said or you think that they have a point. Example: “What do you mean I can’t have a day off? I worked all weekend!” “OK, fair enough. Why don’t you take Friday off?” Another expression that is used in this way is fair point.

Fair dates back to before the year 900. The Old and Middle English adjective fæger meant ‘suitable, agreeable or pleasing to the sight,’ and could be said of people and parts of them, as well as things and places, as well as ‘beautiful, handsome or attractive’ (people), and ‘bright, clear, pleasant’ (said of a day, or the weather). By around the year 1000, the sense ‘morally good’ had been added. The adjective can be traced back to the Proto-Germanic word fagraz and the Proto-Indo-European root pek– (to make pretty). It is related to the Old Saxon fagar, the Old Norse fagr, the Swedish fager and the Old High German fagar (all meaning ‘beautiful’), as well as the Gothic fagrs (fit) and the Lithuanian puošiu (I decorate). The sense ‘light complexion or color,’ usually said of people’s skin, eyes or hair, appeared around the year 1200. ‘According to justice or propriety’ became common in the early 13th century, and ‘equitable, impartial, just or free from bias’ expanded upon the former in the mid-14th century. Many more meanings have been added since, most based on expansions or figurative uses of the older meanings. The adverb comes from the verb, and also dates back to before the year 900, when the Old English fægere meant ‘beautifully.’ The sense ‘honorably’ appeared around the year 1300, while ‘correctly’ and ‘direct’ are from the mid-14th century, and ‘clearly’ from the early 16th century. The noun fair is unrelated. Meaning ‘a market in a town or city’ or ‘a regular meeting to trade,’ it dates back to the early 14th century. It came into English through the Anglo-French fayre, from the Old French feire or faire (fair, market or feast day). It can be traced back to the Vulgar Latin feria (holiday or market fair), from the Latin feriae (religious festival or holiday). It is related to many Romance language words, such as the Spanish feria, but also the the English word feast.

See full definition
Learn more about fair in our forums

Fair in other languages