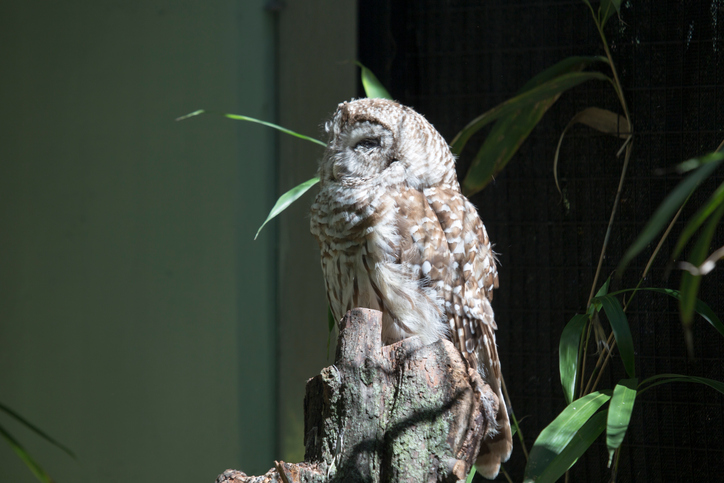 Did that owl just hoot?

To hoot means ‘to cry or shout’, especially in a mocking way. When we are talking about owls, it means ‘to cry’ and it can also be used if anyone or anything makes a similar sound to an owl’s cry. In British English, it also means ‘to sound the horn of a motor vehicle.’ As a noun, the cry of an owl or any similar sound is a hoot and so is a shout, especially if it’s a mocking shout. Informally, hoot means ‘the least bit of concern or interest’ and, as a slang term, a funny person or situation can also be a hoot, although this sense is now dated.

You can watch the opening sequence of the animated TV show Rocko’s Modern Life here:

Listen out at the end for the words “That was a hoot!”

In the dialects of Scotland and Northern England, hoot can be used as an interjection, expressing impatience or dissatisfaction.

In New Zealand slang, hoot means ‘money,’ especially money to be paid for something. The meaning is dated now, but you might come across it in older New Zealand books or movies.

Hoot dates back to the late 12th century. The Middle English verb huten or houten, meaning ‘to shout or call out,’ is most likely of imitative origin, and was first used regarding sounds made by people. It was expanded to describe the calls of certain birds (especially owls) in the mid-15th century. The meaning ‘to call or shout out in disapproval or concern’ dates back to around the year 1600, while the meaning ‘to laugh’ didn’t appear until the 1920s. The noun comes from the verb, and dates back to the mid-15th century, when it originally meant ‘a cry of contempt or dissatisfaction.’ The meaning ‘a laugh’ and, by extension, ‘something funny,’ first appeared in the 1940s. The sense ‘tiny amount or particle’ (as in “don’t give a hoot”) is from the late 19th century.

See full definition
Learn more about hoot in our forums

Hoot in other languages