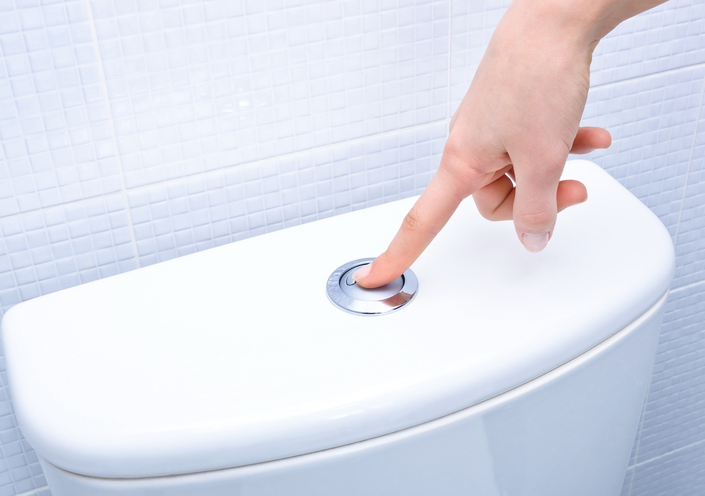 A flush is a sudden rush of emotion, a glowing vigor, or a reddening of the skin. As a verb, to flush means to redden, or to become red, and to inflame or animate. It is also, as you probably know, ‘to flood or wash away with water,’ as we do with toilets. Unrelatedly, as an adjective it means ‘level with the surface of’ or ‘immediately next to.’ It can also mean ‘prosperous, well-supplied with money.’ As an adverb, it means ‘evenly’ or ‘in direct contact.’

Flushed Away is the title of a 2006 animated movie about a pet rat who gets flushed down the toilet, as you can see in this clip from the movie:

To flush, often followed by out, can also mean ‘to rouse and cause to start up or fly off.’ Example: “The noise of the hikers approaching, flushed the birds out of the tree.”

In cards, a flush is any hand of cards that are all of one suit, but not necessarily in sequence. A straight flush is a hand made up entirely of one suit in sequence and a royal flush is the ace, king, queen, and jack and 10 of a single suit.

Flush dates back to the mid-13th century. The Middle English verb flusshen originally meant ‘to move quickly or violently’ as well as ‘to rush, dart or spring.’ Its origin is uncertain, but it may have come into English from the Latin fluxus, flux (flow), or a word derived from this Latin term. While nobody can trace its route, most are certain that the word’s origin is in the Proto-Indo-European root bhel-, meaning ‘to blow or swell,’ which is also the origin of the English words flow, blow, fluent, fluid and flash. In fact, flash and flush may have started as one word, with flash taking on some of the meanings and flush others when they were separated. To flush (up) birds, meaning to make them fly out, was first used in the late 15th century. Some linguists think the word was used because of how the beating of wings sounded like rushing water. The sense ‘to spurt, rush out suddenly, or flow with force,’ usually said of water or liquids, appeared in the mid-16th century. To flush, meaning ‘to become infused with color,’ is a figurative use of this sense, and dates back to the late 18th century. Another figurative use of this sense, ‘to become full of emotion,’ dates back to the early 17th century. The meaning ‘to clean a drain with a rush of water’ also derived from this sense, and dates back to the late 18th century. The adjective flush, meaning ‘perfect or faultless,’ dates back to the mid-16th century, with the meaning ‘full’ appearing around the year 1600. It is probably a figurative use of the verb, with the idea of a stream running full, and level with the banks. The meaning ‘even or level’ dates back to the early 17th century, and was first used to describe a ship’s deck. The adverb, meaning ‘directly or straight,’ comes from the adjective, and appeared around the year 1700. The verb meaning ‘to make even’ also comes from the adjective, and dates back to the mid-19th century. Finally the noun comes from the verb, with different meanings appearing soon after they appeared in verb or adjective form. The card game sense dates back to the early 16th century, and is only distantly related to the other senses. Its origin is the same, but it seems to have come into English from the Middle French flus, meaning ‘a flowing or rolling.’

See full definition
Learn more about flush in our forums

Flush in other languages

Flush was suggested by Helen, from Chicago.