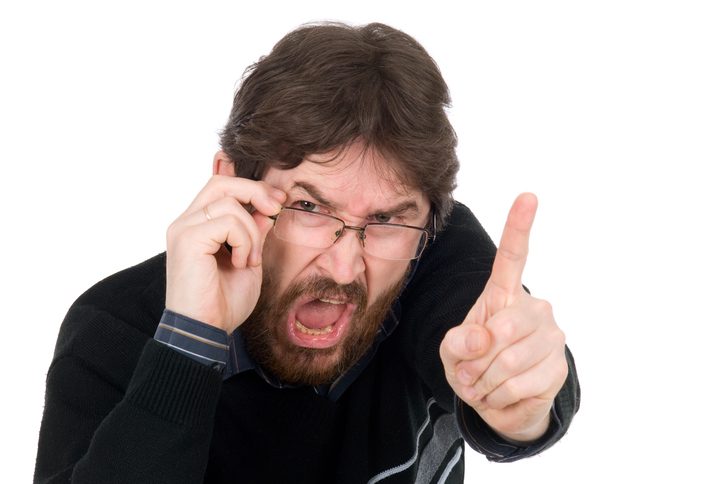 To wag means ‘to move up and down or from side to side,’ as dogs do with their tails when they’re happy. When we are talking about someone’s tongue, we mean that they are moving it in idle chatter. If you shake your finger at someone in reprimand, you’re also wagging it, as you are your head if you shake or nod it. To wag also means ‘to travel or get along,’ although this sense is rarely heard these days, and, originally in British English, but now mainly used in Australian English, it means ‘to be absent from school without permission.’ A wag is the act of wagging and also, although this sense is dated, a clever and witty person.

We all know that dogs wag their tails, but sometimes you might hear English speakers talking about the tail wagging the dog. This is a figurative expression, meaning that someone or something less important is controlling the actions of someone or something more important. In the US, the phrase is particularly used in politics to talk about causing a movement among a large body of people through the use of something or someone of lesser influence. It is from this phrase that the title of the 1997 movie Wag the Dog comes. You can see the movie trailer here:

Informally, a Wag or WAG is the wife or girlfriend of a professional sportsman, especially a footballer. The word comes from the acronym for wives and girlfriends.

Wag, meaning ‘to waver or vasillate,’ or ‘to lack steadfastness,’ dates back to the late 12th or early 13th century, as the Middle English waggen. It probably came partly from a Scandinavian source, and partly from the Old English waggian (to move backwards and forwards). It can be traced back to the Proto-Germanic root wag– and the Proto-Indo-European root wegh– (to go, move, or transport in a vehicle). It is related to the Old Norse vagga (a cradle), the Danish vugge (to rock a cradle) and the Old Swedish wagga (to fluctuate, or to rock a cradle), as well as the Old High German weggen and Gothic wagjan (both meaning ‘to wag’). The transitive sense, ‘to move something back and forth,’ dates back to around the year 1300, and dogs have been said to wag their tails since the mid-15th century. The noun wag, meaning ‘the act of wagging,’ dates back to the late 16th century, but the noun wag, meaning ‘a person who makes jokes’ is slightly older (mid-16th century). Some linguists think it was originally a short form of waghalter, which meant ‘gallows bird’ (a person destined to swing from the gallows for committing a crime), though others think it comes directly from the verb, and point to the noun wagger (someone who agitates or stirs up trouble) as proof.

See full definition
Learn more about wag in our forums

Wag in other languages