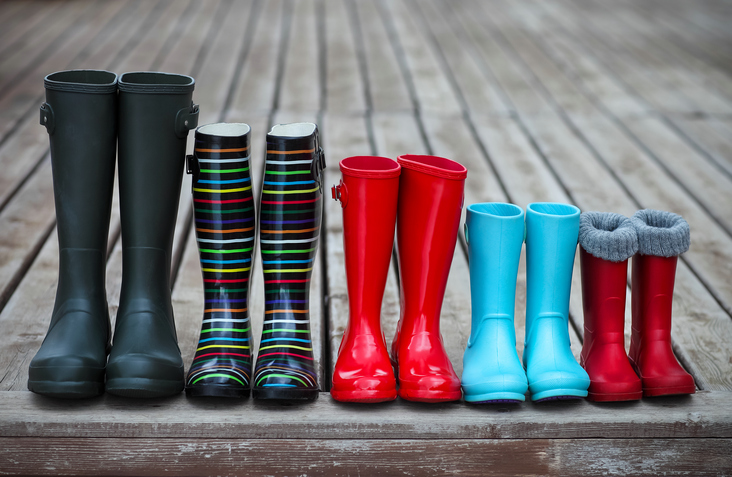 You probably know that a boot is a strong, heavy shoe or a rubber shoe, mostly used when it rains, that also covers part of the leg. In US English, a boot is also a metal device attached to the wheel of car to keep it from moving (in UK English, this is called a wheel clamp). In UK English, the boot is the trunk of a car. Informally, a boot is a kick. As a slang term, the boot is a dismissal or discharge. As a verb, it means ‘to kick’ and ‘to put boots on’ or ‘equip with boots.’ Informally, usually used with out, it means ‘to eject, dismiss, or discharge someone.’

lick someone’s boots: to flatter someone too much, to be obsequious to someone. Example: “Kate only got that promotion because she’s always licking the boss’s boots.”

give someone the boot: fire someone. Example: “That new employee is hopeless; we’re going to have to give him the boot!”

die with your boots on: to die while working. Example: “Patsy fell to her death while trying to get a good photo for her magazine; still, she loved her job and would have wanted to die with her boots on.”

to boot: as well. Example: “That guy is arrogant and rude to boot.”

You can listen to Nancy Sinatra singing “These Boots Are Made for Walking” here:

To boot or to boot up also means to start a computer. Example: “When I get to work in the morning, I boot up, and then check my email.”

The related adjective bootleg is used to refer to anything that is made or sold secretly and illegally. The term comes from the practice of soldiers sneaking bottles of alcohol into army camps in the legs of their boots during the American Civil War, which became known as bootlegging. Later, during prohibition in the US, people used to sell alcoholic drinks from bottles they kept hidden in their bootlegs. Over the course of the twentieth century, the term bootleg came to be used for almost anything illegally produced or counterfeited, so you can talk about a bootleg recording of a song or a bootleg copy of a movie, or bootleg designer handbags, for example.

Boot, meaning ‘a covering for the foot,’ dates back to the late 13th century. It came into Middle English as bote, from the Old French bote (boot). It originally referred only to riding boots. The origin is unknown, though it is related to the Spanish and Portuguese bota (boot). Linguists believe that it spread to many Romance languages through Medieval Latin (bota, botus, found in texts from the late 10th century and throughout the 11th century), but may have originally been borrowed from a Germanic language. Around the year 1600, the meaning ‘the fixed, external step of a coach’ appeared, and it later extended to ‘the low outside compartment (on a coach) for storing luggage.’ In the UK, this sense was later kept for cars, though in the US this part has always been known as the trunk. The verb comes from the noun, and (meaning ‘to beat with a boot’), dates back to the early 19th century. It came to mean ‘to kick or to kick in’ in the late 19th century, and ‘to outfit with boots’ a few years later. A second, unrelated noun, boot, has been around in English since before the year 900. The Old English noun bot (meaning ‘help, relief or advantage,’ as well as ‘atonement’ and ‘an improvement’) came from the Proto-Germanic boto. It is related to the German Buße (pennance, atonement) and the Gothic botha (advantage), as well as the English adjective better. While in this sense, boot still means ‘profit or use,’ it’s mostly used in the expression ‘to boot.’

See full definition
Learn more about boot in our forums

Boot in other languages