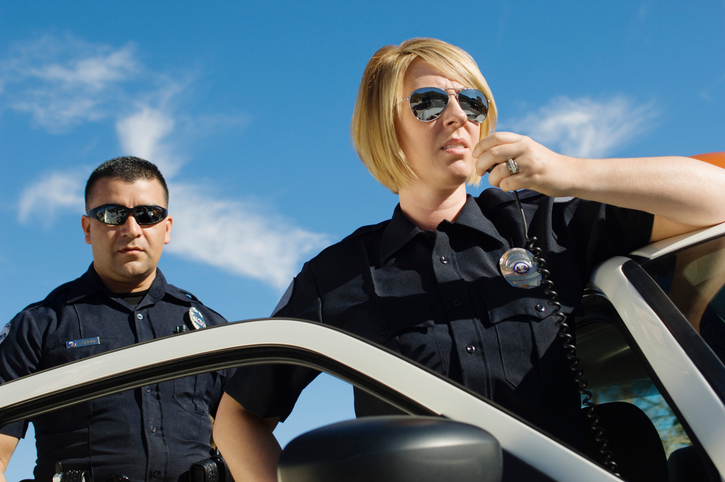 To cop means ‘to seize’ or ‘get’ and, always followed by out, it means ‘to avoid a responsibility’ or ‘to back out of a promise.” Unrelatedly, you might have heard that cop is an informal word for a police officer and, in this sense, the word is sometimes used figuratively about a person who wants to regulate an activity or behavior. In UK slang, often in the expression “a fair cop,” it means ‘capture’ and, always in the negative (most often in the expression “not much cop”), it means that something isn’t much good or isn’t of much value.

cop a plea (mainly US, informal): to plead guilty in order to get a lighter sentence or to plead guilty to a lesser charge in an attempt to have more serious charges dropped. Example: “The police had too much evidence on the gang boss, so he decided to cop a plea.”

cop it (UK, slang): get in trouble. Example: “When Mum finds out you’ve broken the window, you’re really going to cop it!”

cop off with someone (UK, slang): to begin an amorous relationship with someone. Example: “Apparently, Liz copped off with Dan at the party on Saturday night.”

There are lots of TV shows featuring cops and you may be familiar with the expression good cop, bad cop. It refers to an interview technique where one police officer is kind and friendly to the suspect and the other is very hard on them. Of course, the technique does depend on both cops agreeing which of them is good cop and which is bad cop, as you can see in this clip from the animated show American Dad:

Now archaic, although you might find it in the names of some places or in some dialects, in UK English, cop used to mean ‘the top or summit of anything’ and, by extension, ‘the head or the crest of a bird’s head.’ From this meaning developed a related meaning, which is still used, as a conical mass of yarn wound on a spindle.

Cop dates back to the very early 18th century. It comes from a northern English dialect, where it meant ‘to seize or catch,’ much like the Scots verb cap means ‘to seize,’ and an obsolete northern English word, cap, meant ‘to arrest.’ Its origin is uncertain, but some linguists think it came from the Old French caper (to take), from the Latin capere (to take) and the Proto-Indo-European root kap– (to grasp). Others think it may have come from the Dutch kapen (to take), which itself can be traced back to the Old Frisian capia (to buy), and is related to the Old English ceapian (cheap). The noun cop, as slang for a police officer, dates back to the mid-19th century. It is a shorter form of copper, which appeared a few years earlier, and comes from the verb. The expression cop out dates back to the mid-20th century, and was originally US slang. It probably evolved from cop a plea, which dates back to the 1920s, and uses the verb cop with its original meaning, as well as being related to the police sense.

See full definition
Learn more about cop in our forums

Cop in other languages

Intermediate+ Word of the Day: picket