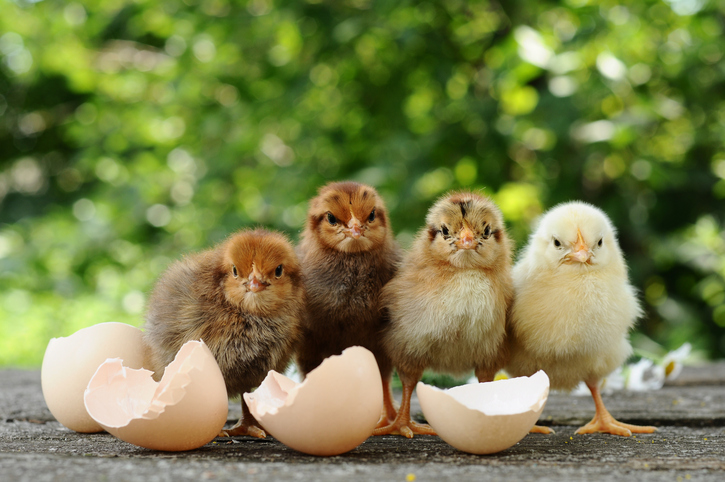 To hatch means ‘to break out from an egg,’ as birds do when they are born, ‘to cause to emerge from an egg,’ as birds do by sitting on their eggs to keep them warm until they hatch, and, when we are talking about the egg, ‘to break open to let the baby birds out.’ Figuratively, it also means ‘to plan or bring something forth.’ Unrelatedly, the noun hatch is an opening in a vessel used as a passageway, the cover of such an opening, and also the door of an aircraft.

Of course, we tend to think of birds when we think of eggs, but many reptiles are also hatched from eggs, as were the dinosaurs. Here you can see a clip of a dinosaur hatching from the movie Jurassic Park:

To hatch can also mean ‘to mark something with lines,’ especially closely set parallel lines, as a way of creating shading effects in drawing. You can read a Wikipedia article about it by clicking here.

As a humorous reference to the passageway meaning, sometimes hatch is used as a word for the mouth or throat, especially in the expression “down the hatch,” which is used mainly as a toast when drinking.

See full definition
Learn more about hatch in our forums

Hatch in other languages