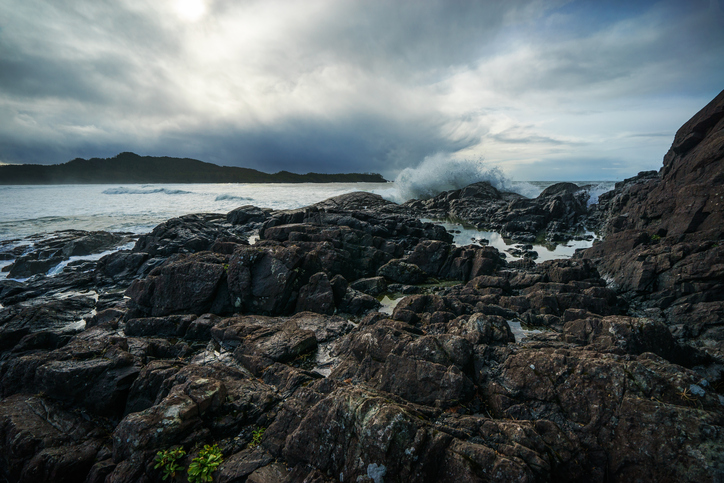 A rock is, of course, a large mass of stone that forms a hill or a cliff or a piece of stone. Colloquially, a gemstone, especially a diamond, is also called a rock. As a verb, unrelatedly, to rock means ‘to move gently from side to side’ and also ‘to shake violently.’ It is also a synonym for shake, in the sense of being moved by great emotion. As a noun, rock is not only a rocking movement but also a style of music. To rock, therefore, also means ‘to dance to or play this kind of music’ and the adjective rock refers to anything related to this music style.

rock candy (US): candy in the form of large sugar crystals. Example: “They sell rock candy at many of the tourist shops in the resort town.”

stick of rock (UK): a long cylinder of candy made from boiled sugar, often sold at the seaside. Example: “We get a stick of rock whenever we go to Brighton.”

get your rocks off (slang, vulgar): orgasm. Example: “When Dave watched that sleazy movie, he got his rocks off.”

rock the boat: cause trouble, be disruptive. Example: “I know things aren’t great at work at the moment, but perhaps it’s best not to rock the boat by complaining about your workload.”

As mentioned above, rock is a style of music, but actually it can refer to two styles. Firstly, rock and roll, is a musical genre that was at the forefront in the 1950s, with singers like Elvis Presley, Jerry Lee Lewis, and Little Richard. These days, when native speakers use rock on its own to refer to music, it is likely that they are talking about a somewhat harder musical style that grew out of rock and roll, which is typified by bands like the Rolling Stones, Queen, The Doors, The Who, and Led Zeppelin, but can also encompass metal, with bands like Iron Maiden or Metallica. So today we’re going to share two songs with you. Firstly, one of the great rock and roll songs, “Whole Lotta Shakin’ Goin’ On”, by Jerry Lee Lewis:

The expression “on the rocks” has two different meanings in English. If you order a drink on the rocks, it means that you want the drink poured over ice. So you might ask for “A whiskey on the rocks” for example. However, if you say something other than a drink is on the rocks, that means it’s in trouble. For example: “Ben’s wife has never really forgiven him for that affair; they’re still together, but I’m pretty certain their marriage is on the rocks.”

Rock, the noun meaning ‘a mass of stone,’ dates back to the early 14th century. It came into late Middle English as rokk(e) from the Old French roc(c)que or roche, or the Old North French roque, but there is also a precursor in Old English, the suffix -rocc, found in words like stānrocc (stone rock or obelisk). It can be traced back to the Vulgar Latin rocca, and is related to the Medieval Latin rocha, the Spanish and Provençal roca, and the Italian rocca, among others, though its origin is uncertain. Some linguists believe it may have come from Celtic, and point to the Breton roch as evidence. Rock was used in Middle English mostly to refer to rock formations, not individual stones, but this definition had expanded by the 15th century. The figurative sense, ‘strong foundation,’ appeared in the early 16th century, while the coloquial sense referring to precious stones, especially diamonds, dates back to the early 20th century in the US. The verb rock, meaning ‘to sway,’ dates back to before the year 1100. The Old English roccian and Middle English rocken originally meant ‘to sway a child gently to and fro.’ Its origin is unknown, but it is thought to be Germanic or perhaps Scandinavian, because it is related to the Middle Dutch rocken or rucken, the Old High German rucchan, and the German rücken (all meaning ‘to move jerkily), but also the Old Norse rykkja (to jerk, pull, tear or move) and the Swedish rycka (to pull or pluck). The meaning expanded to include ‘to cause to move back and forth’ in the 13th century, and ‘to move back and forth’ in the 14th century. Finally, rock, the musical genre, is short for rock and roll, which was originally slang for sex, due to the back and forth movement, which is also prevalent when people dance to this kind of music. Both the musical and the sexual senses date back to the 1920s in the US, specifically, the blues song “My Man Rocks Me (with One Steady Roll).” It originally meant to move to the beat, and expanded to playing the music in the 1950s, and hearing the music in the 1960s.

See full definition
Learn more about rock in our forums

Rock in other languages