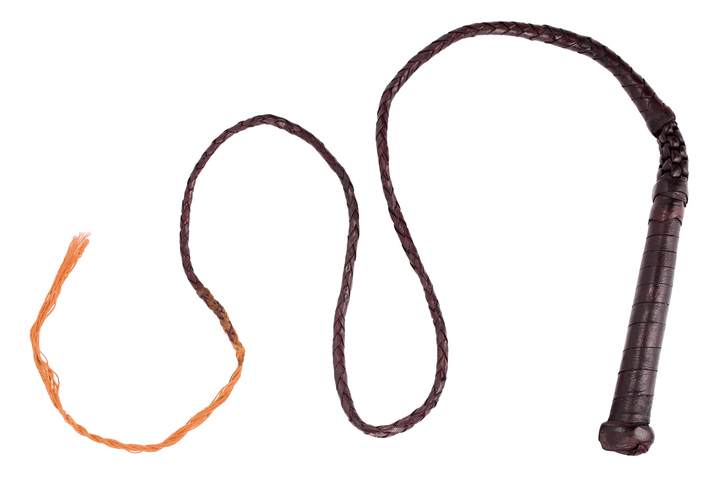 lash out: react angrily to something. Example: “Moody teenagers often lash out at their parents.” This expression can also mean ‘to try to hit or kick someone.’ Example: “When he was asked to leave, the drunken man started lashing out at the barman.” In UK English, lash out can also mean to spend money on. Example: “We’ve just lashed out on some new furniture for our house.”

on the lash (UK, slang): out drinking. Example: “When I was young, I used to go out on the lash with my friends most weekends.”

whiplash: the stroke of a whip. The word is also used to describe the neck injury people often get in car accidents, when the head is flung forward and then quickly back again in a movement that resembles the flick of a whip. Example: “Felice had whiplash after the car behind her slammed into her car.”

Damien Chazelle’s 2014 movie Whiplash centers around a piece of music of the same name, but is also a reference to the bullying tactics used by the jazz instructor to push his students to achieve more. You can see the movie trailer here:

Long eyelashes are often considered to be beautiful, especially on women. For those of us who don’t have naturally long lashes, you can always use false ones. Here’s a video showing you how to apply them:

Lash dates back to around the year 1300. The verb lash originally meant ‘to deal a blow.’ Its origin is uncertain, but it is thought to be imitative of the sound of a blow. The only confirmed related word, the Irish noun lasg (‘a whip or lash,’ as well as ‘a whipping’) seems to have come from the English word. The meaning narrowed to ‘strike with a whip or a lash’ in the late 14th century. The noun comes from the verb, though it also dates back to around the same time. The original meaning, ‘a blow or stroke’ evolved to ‘a strike with a whip,’ as well as ‘the flexible part of a whip’ around the same time the verb’s meaning changed. The lash, meaning ‘punishment by whipping,’ dates back to the late 17th century, while eyelash (and its short form, lash) was first used in the early 18th century, due to their similarity to the shape of a whip. Lash out, meaning ‘to strike out violently,’ dates back to the mid-16th century, and preserves the original meaning. The unrelated verb lash, meaning ‘to tie or bind,’ dates back to the early 17th century, and comes from the Middle French lachier and the Old French lacier (to lace on, fasten with laces, entrap or ensnare). It was originally used by sailors.

See full definition
Learn more about lash in our forums

Lash in other languages