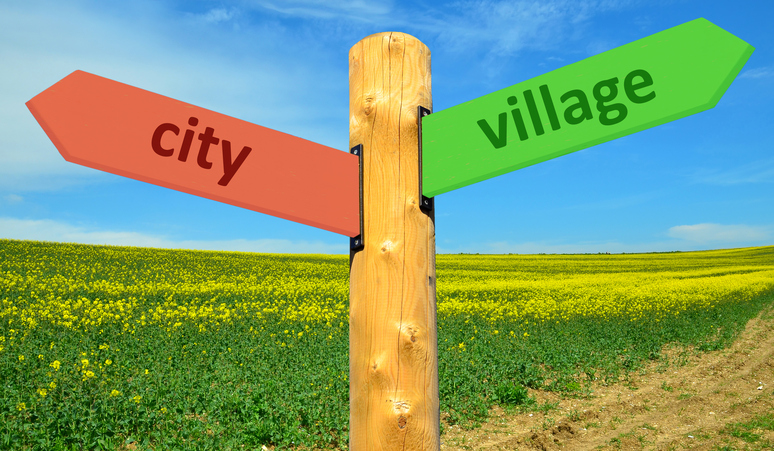 Not everyone wants to dwell in the same kind of place.

To dwell is a formal term meaning ‘to live somewhere as a permanent residence’ and also ‘to live or continue in a particular state.’ Figuratively, it means ‘to endure or remain.’ In more everyday language, always followed by on or upon, it means ‘to write, talk or think about something for a long time.’ If a machine dwells, it means that it stops moving for an interval of an operation. The noun dwell is related to this last sense and means ‘a period in a cycle in the operation of a machine or engine during which a part remains motionless.’

You can listen to Van Morrison’s song “Across the Bridge Where Angels Dwell”, from his 1982 album Beautiful Vision, here:

The related noun dwelling is another word for a house or place of residence. A dweller is someone or something that lives somewhere and it is often used with another noun that specifies the kind of place that person or creature lives, like city dweller or prairie dweller, for example.

Dwell dates back to before the year 900. The Old English verb dwellan originally meant ‘to make a fool of someone’ or ‘to lead someone astray,’ but soon evolved to ‘mislead or deceive.’ It further evolved, as the Middle English verb dwellen, to ‘hinder or delay,’ and by the year 1200, to ‘linger.’ This sense expanded to ‘make a home’ in the mid-13th century. The verb’s origin can be traced back to the Proto-Germanic verb dwelan (to lead or go astray), and the Proto-Indo-European root dheu– (dust, cloud, vapor or smoke). It is related to the Old Norse dvöl (delay) and dvali (sleep), the Middle Dutch dwellen (to stun, make giddy or perplex), the Old High German twellen (to hinder or delay), the Danish dvale (trance or stupor) and dvaelbær (narcotic berry), the Old English gedweola (error, heresy or madness), and the Middle English dwale (nightshade). The noun comes from the verb and, related to a delay in the operation of an engine or machine, dates back to the 19th century.

See full definition
Learn more about dwell in our forums

Dwell in other languages