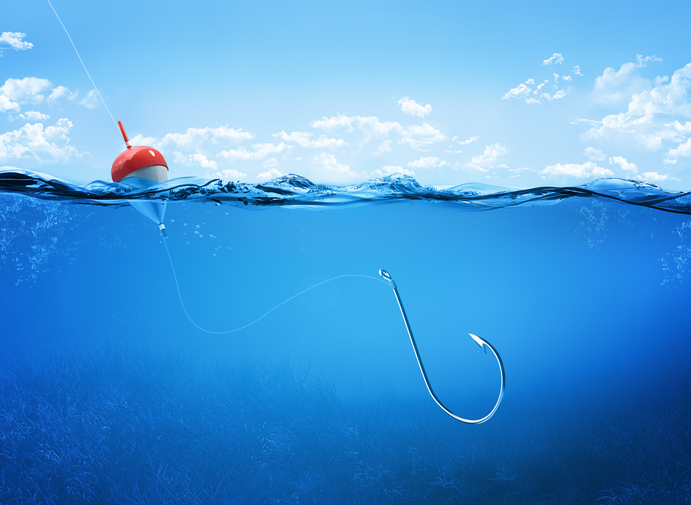 Lure is anything that attracts or tempts someone and also the power of attracting. With a more negative connotation, lure is anything that tempts people or animals into a trap. In hunting or fishing, a lure is a live, plastic, or metal object used as bait. As a verb, to lure means ‘to attract, to tempt.’

in lure: used in heraldry to describe a pair of wings with the tips pointing downward.

Listen to Ella Fitzgerald singing “All of You” here:

Listen out for the first line, “I love the looks of you, the lure of you.”

In the 15th century, a lure was a collective noun for a group of young women.

A lure is also a device used by falconers to call their birds back to them, originally a bunch of feathers resembling a bird, used to feed the bird of prey during training. The falconers would whip it around so the birds would see it “fly” and come back for food. This is the earliest meaning of the word, and lure often has a sense of movement. People or animals are often lured into something, like a trap, or away from somewhere (for example, if a gang was committing a robbery, one of them might lure the security guard away from his/her post). As a verb, you can usually use lure and tempt interchangeably, but tempt does not automatically have the sense of drawing someone towards something that lure does.

Lure dates back to the late 14th century. The noun, whose spelling has not changed, came into Middle English from the Anglo-French lure or luere, from the Old French loirre. It was originally the name of a device to recall trained falcons and other birds of prey. It originated in a Germanic language, though linguists are unsure which, and probably came into French from the Frankish lothr. It can be traced back to the Proto-Germanic verb lothran (to call), and is related to the Middle High German luoder and Middle Low German loder (lure, bait), the German Luder (lure, deceit or bait), the French leurre (lure), and the Old English laþian (to call or invite) and German laden (to invite or summon). The figurative sense of ‘an attraction’ appeared soon after the word entered English, though the main sense did not widen to ‘something used to attract a fish or animal’ until the late 17th century. The verb comes from the noun, and dates back to the late 14th century, meaning both ‘to attract (a hawk or other trained bird of prey) by casting a lure’ and, figuratively, ‘to allure, entice or tempt.’

See full definition
Learn more about lure in our forums

Lure in other languages