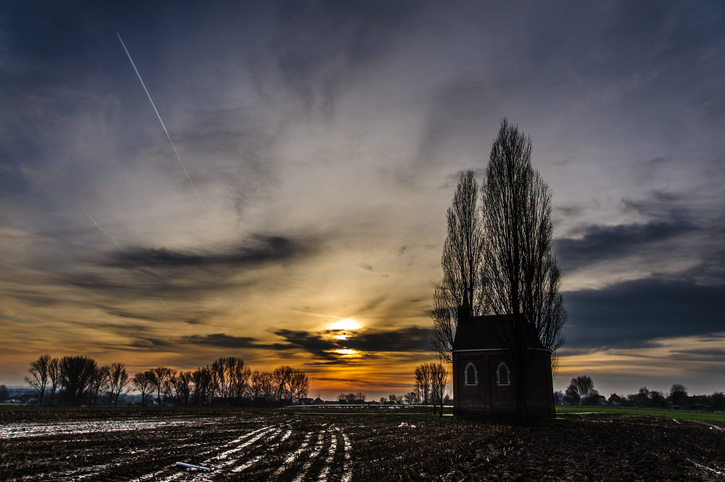 Even beautiful landscapes may appear bleak in winter.

If something is bleak, it means that it is bare or desolate or that it is cold or raw. When referring to people, feelings, or situations, bleak means ‘without hope or depressing.’ Something offering little or no excitement can also be bleak. Unrelatedly, a bleak is a kind of fish, found mostly in Europe, and its scales have a silvery pigment that is used in the production of artificial pearls.

Bleak House is a well-known nineteenth-century novel by English author Charles Dickens. In 2005, the BBC made a fifteen-part TV adaptation of the novel. You can see the trailer for it here:

It is thought that bleak may have started out as a variation of an adjective form of the verb bleach (blǣcan in Old English, pronounced blea-kan). This would fit with one of its early meanings, which was ‘pale’ or ‘lacking in color.’ Over time, it came to be used more specifically to refer to vegetation that was not as lush and green as it might be and then to mean somewhere or something that seemed bare or entirely lacking in vegetation. The meaning of ‘pale’ still exists in some dialects.

Bleak dates back to around the year 1300. The Middle English adjective bleke or bleik, meaning ‘pale or pallid,’ likely developed as a blended variant of the Middle English bleche (Old English blǣc), an adjective formed from the OE blǣcan, meaning ‘to bleach,’ and blake (old English blāc), which meant ‘pale.’ Both of these date back to before the year 900, and have the same origin. They came into English from the Old Norse bleikir (pale, whitish or blond), and can be traced back to the Proto-Germanic root blaika– (shining or white) and the Proto-Indo-European root bleh– (‘to shine, flash or burn,’ when used to form a verb, and ‘shining white’ when forming an adjective). It is related to the Old Saxon blek (pale or shining); the Dutch bleek, the Old High German bleih and the German bleich (all meaning ‘pale’), and of course the English bleach. The original meaning is now obsolete, but the figurative sense of ‘lacking color’ led to the meanings of ‘bare, barren, desolate,’ used to describe a landscape since the early 16th century, and figuratively since the late 16th century, and ‘cheerless’, which dates back to the early 18th century. The noun, meaning ‘a type of fish,’ dates back to the 15th century. Its origin is unknown, but some linguists think that it may be related to the adjective, as the fish is a pale silver color.

See full definition
Learn more about bleak in our forums

Bleak in other languages