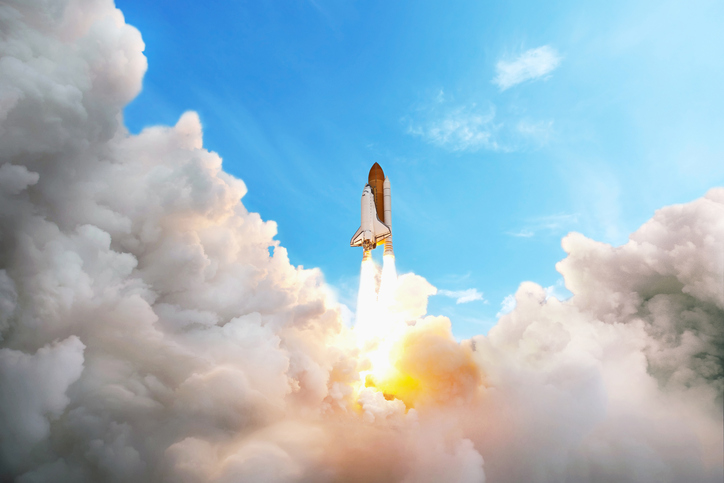 Space shuttles need thrust to get them off the ground.

To thrust means ‘to push forcefully or to shove.’ Sometimes followed by on or upon, it also means ‘to impose acceptance of something or someone’ and ‘to extend or present something.’ As a noun, a thrust is not only the act of thrusting, but also the main point of something, for example, an argument or discussion. In mechanics, thrust is the force produced by a propeller, propulsive gases, etc., and, in military terminology, a thrust is an attack.

cut and thrust: something that is lively and animated. Example: “The conversation grew heated as people got carried away in the cut and thrust of the debate.”

You can listen to Procol Harum’s song “The Final Thrust” here:

The song has been set to an edited version of the 2001 animated short film The War Game, clearly in reference to the military meaning of thrust.

If you push a part of your body forcefully in any direction, then you are thrusting it and, because doing so means you have to tense your muscles, thrusts can be a good way of toning some muscles. Here’s a video showing you how to do hip thrusts to tone your glutes (those are the muscles in your buttocks):

Thrust dates back to the mid-12th century. The Middle English verb thrusten or thrysten (the y was pronounced like a u, but with the mouth shaped like you were sucking on a straw) came into English from a Scandinavian source, though linguists are not sure which. It can be traced back to the Proto-Germanic verb thrustijanan, and some researchers think it originated in the Proto-Indo-European root treud – (to push or press), but others disagree. It is related to the Old Norse thrȳsta (to thrust, force or press) and, if it does come from the PIE root treud-, it is also related to the English word threat. The noun comes from the verb and, meaning ‘the act of pressing,’ dates back to the early 16th century. The meaning we use today, ‘the act of thrusting,’ appeared in the late 16th century. The meaning ‘propulsive force dates back to the early 17th century, while the figurative sense, ‘main theme, aim, point or purpose,’ is very new; it started to be used in the 1960s.

See full definition
Learn more about thrust in our forums

Thrust in other languages