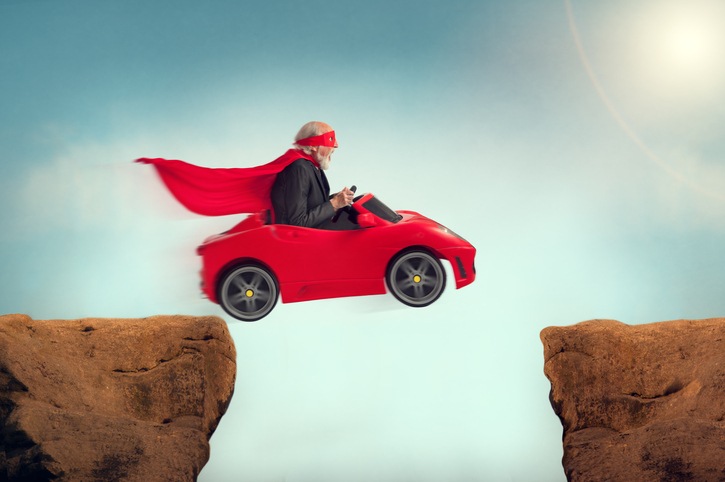 The verb to stunt means ‘to prevent or slow the growth of something.’ Unrelatedly, the noun stunt is a performance that displays someone’s skill or daring, or a feat to attract people’s attention. In movies, a stunt is the performance of something dangerous done for a scene.

Movie stunts are an art form in themselves and, although CGI (computer-generated imagery) is often used now in place of real stunt performances, some stunts are still performed by actors or their stunt doubles (also known as stuntmen or stuntwomen). This video shows a top ten of movie stunts:

As stunt doubles perform stunts in movies, you might think that stunt casting refers to giving roles to stuntmen and women, but in fact the term means giving a small role to a very famous actor in order to generate publicity for a film or TV show.

The verb stunt dates back to the late 16th century. It originally meant ‘to provoke, anger or irritate,’ and came from an obsolete adjective that existed in both Old and Middle English, stunt, which meant ‘stupid, foolish or obstinate,’ though in the 15th century, it was also used colloquially to mean ‘of short duration.’ By the year 1600, the verb’s meaning had evolved to mean ‘to bring to an abrupt stop,’ and by the mid-17th century, it meant what it does today (‘to dwarf’ or ‘to stop or slow the growth of something’). It can be traced back to the Proto-Germanic adjective stuntaz (short or truncated), and is related to the Middle High German stunz (short, blunt or stumpy), the Old Norse stuttr or stuntr (scanty or short) and the English verbs stint and stutter. The unrelated noun originally meant ‘a feat to attract attention,’ and dates back to the late 19th century; it was originally American college sports slang. Its origin is unknown, but it may have been a variant of the colloquial sense of stump (a dare or challenge). Its use in film dates back to the 1930s.

See full definition
Learn more about stunt in our forums

Stunt in other languages