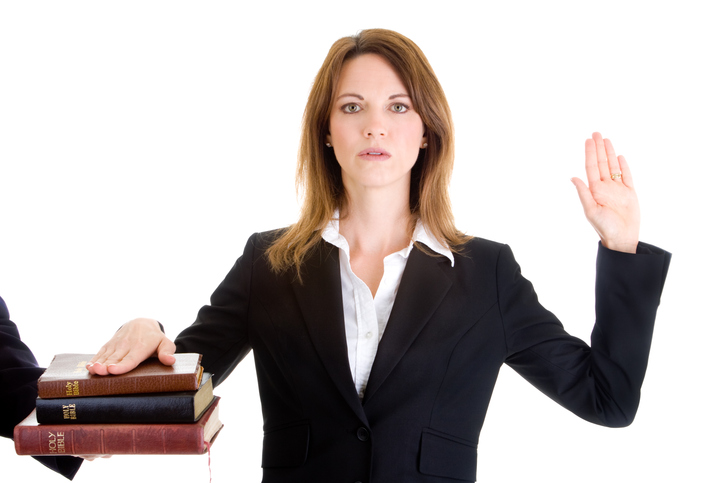 To swear means ‘to make a solemn declaration, statement, or promise.’ If you swear by something or someone, you are naming a sacred object or being a witness or you are saying you have great faith in something. To swear is also ‘to bind or make someone promise something by oath.’ As a legal term, it means ‘to testify on oath.’ It also means ‘to use vulgar or profane language.’

swear in: to admit to office or service by administering an oath. Example: “The jury has to be sworn in before the trial can begin.”

swear off: to promise to give something up. Example: “Every time Tania wakes up with a hangover, she swears off alcohol; she never sticks to it though!”

swear out (US): secure a warrant for arrest by making an accusation under oath. Example: “Warrants had been sworn out for the arrest of all the gang members.”

swear blind: to claim something strongly, to insist. Example: “Hamish swore blind he had heard someone creeping around the tents in the night, even though no one else had heard a thing.”

“This I Swear” is the title of a 1959 song by American group The Skyliners. You can listen to the song here:

Swear words are words that are considered vulgar and offensive. Of course, how offensive people find them will depend on context and who you are speaking to. Most people will forgive a swear word or two if you’ve just had a nasty fright or hurt yourself, for example, and swearing in an informal context with friends who know you well normally won’t cause offense either. However, you should always be careful of swearing in public places, as people are likely to consider you to be rude and aggressive if you do so, and you should never use swear words in formal contexts. Sometimes, you’ll hear people using words that sound similar to swear words, because they want to avoid swearing.

Swear, meaning ‘to take an oath,’ dates back to before the year 900. The Old English verb swerian, which became sweren in Middle English, can be traced back to the Proto-Germanic root swarjan-, from the Proto-Indo-European root swer– (to speak, talk or say). It is related to the Old Saxon swerian, the Old Frisian swera, the Old Norse sverja, the Danish sverge, the Middle Dutch swaren, the Old High German swerien, the German schwören and the Gothic swaren (all meaning ‘to swear or give an oath’), as well as the Old Church Slavonic svara (quarrel), the Oscan sverrunei (to the speaker) and the English word answer. The sense ‘to use bad language’ appeared in the early 15th century, developed from the idea of invoking sacred names. Swear in was first used around the year 1700, and is related to the original Old English use. Swear off first appeared around the year 1900.

See full definition
Learn more about swear in our forums

Swear in other languages

Swear was suggested by Yara, from Germany.