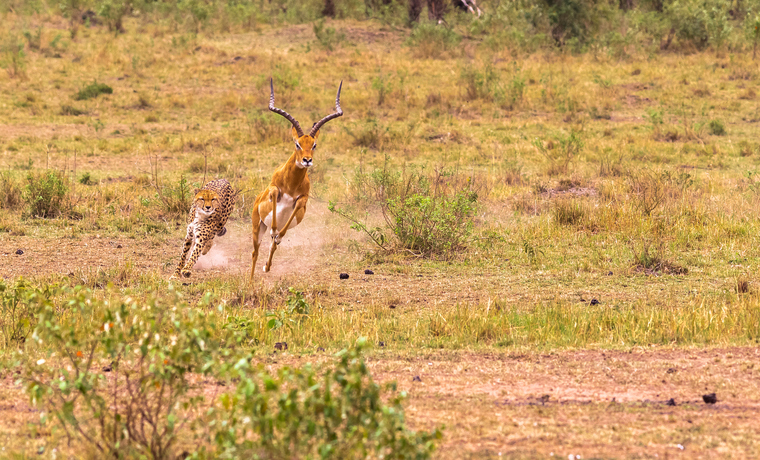 The 1971 movie Duel is about a car driver who is pursued by a large truck throughout the whole movie. You can see the trailer for it here:

Pursue can be used as a synonym for chase, but when you chase someone or something, there is an implication of exertion and speed, while pursue implies a more steady, deliberate effort.

Be careful not to confuse pursue with peruse, which means ‘to look through something carefully.’

Pursue, which originally meant ‘to follow with hostile intent,’ dates back to the early 13th century, as the Middle English pursuen. It came into English through the Anglo-French pursuer and the Old French poursuir, a variant of the Old French porsuivre (‘to chase, pursue or follow,’ and ‘to continue or carry on’). It can be traced back to the Vulgar Latin prosequare and the Latin prosequi (‘to follow, accompany or attend,’ ‘to follow up or pursue,’ and ‘to follow after or escort’). The Latin verb is made up of the prefix pro– (‘forward,’ from Proto-Indo-European root pro-) and the verb sequi (to follow), which can be traced back to the Proto-Indo-European root seqw (also ‘to follow’). It is related to the French poursuivre and the Spanish perseguir (both meaning ‘to follow or chase’), along with many other Romance-language verbs, and the English verbs prosecute and sue. The meaning ‘to proceed or follow,’ whether used literally (a path, for example) or figuratively, dates back to the late 14th century, even though this sense already existed in Latin.

See full definition
Learn more about pursue in our forums

Pursue in other languages