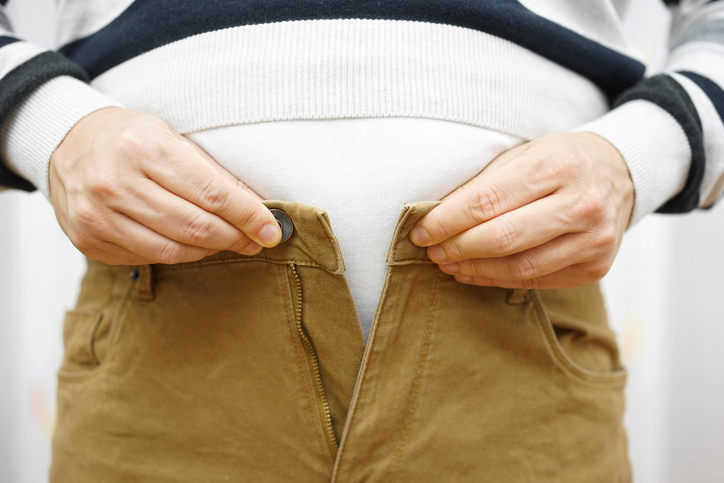 Most of us have experienced our clothes getting a little too tight from time to time.

If something is tight it means that it is secure and not easily moved, tense, firm, or that it fits too closely. Figuratively, it can also mean ‘something difficult to deal with’ and ‘that allows little time or space in between things.’ If we say some part of our bodies feels tight, that means ‘it feels tense or painful.’ Informally, if someone is tight, it means that they are not generous with money. As a slang term, it means that someone is a bit drunk, although this sense is dated now. As an adverb, it means ‘in a tight way or soundly or deeply.’

run a tight ship: do things very efficiently. Example: “The boss runs a tight ship, so you have to be willing to work hard.”

sit tight: take no action. Example: “I know you are anxious to hear back from the colleges you applied to, but there’s nothing you can do now; just sit tight and wait for them to email you.”

You can listen to the Beatle’s song “Hold Me Tight”, from their 1963 album With the Beatles, here:

As a suffix, tight means that something is made or formed so that it can’t be penetrated by the noun that tight is a suffix to, for example: watertight or airtight.

Tight, meaning ‘dense, close or compact,’ dates back to around the year 1400, as tyght, a late Middle English variant of the Middle English thight, which meant ‘dense, solid or tight.’ If we search for the origins of the latter, we can find an Old English suffix –þiht (the letter ‘þ’ is pronounced like the ‘th’ in three), which meant ‘firm or solid,’ though linguists agree that the adjective probably originated from both the suffix and the Old Norse þēttr or thēttr (meaning ‘solid, watertight or close in texture’). Both can be traced back to the Proto-Germanic root thinkhta– and the Proto-Indo-European root tenk– (‘to thicken or curdle’ and ‘to become thick’). It is related to the Middle High German dihte (dense or thick), the German dicht (dense or tight), and the Old High German gidigan and German gediegen (genuine, solid or worthy), as well as the Irish techt (curdled or coagulated), the Lithuanian tankus (close or tight), the Persian tang (tight) and the Sanskrit tanakti (draws together or contracts). The meaning of tight has varied over the years. The sense ‘drawn or stretched’ appeared in the mid-16th century, while ‘fitting closely’ (when speaking of clothes) is from the late 18th century. The sense ‘evenly matched,’ when referring to a contest, is from the early 19th century, as is the slang meaning ‘drunk.’ The figurative sense to describe intimate or close friendships appeared in the mid-20th century. Tight has been used as an adverb since the mid-17th century, particularly in phrases like sit tight (early 18th century) and sleep tight (mid-19th century). Its use as a suffix is actually older than the adjective itself, and maintains the original Old English sense.

See full definition
Learn more about tight in our forums

Tight in other languages