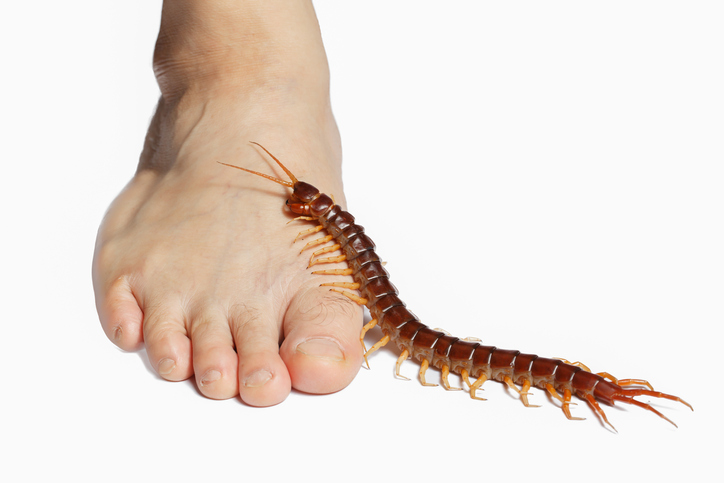 Insects creep and they give some people the creeps too!

To creep means ‘to move slowly with the body close to the ground,’ ‘to approach slowly and without getting noticed’ or ‘to become noticed slowly over time.’ A creep is of course the act of creeping, but, as a slang term it is also a word for someone you find very strange or unpleasant. This slang sense is more common in the US, where it can also describe a person who makes us uncomfortable, or behaves in a certain way just to get what he or she wants; it is often used in the context of unwanted sexual attention.

the creeps: an uncomfortable feeling of fear or disgust, as though something is crawling over your skin. Example: “That horror film has given me the creeps.”

creep someone out: give someone the creeps. Example: “Lucy pretended the house was haunted to creep her friends out.”

make your flesh creep: give you the creeps: Example: “I can’t stand spiders; they make my flesh creep.”

Creep is the title of Radiohead’s 1992 debut single. You can listen to it here:

To creep also means ‘to behave in a servile way,’ normally in order to get something you want from someone. For example, someone in a class might creep to the teacher or someone at work might creep to the boss. It’s also a good verb to describe what a cat is doing when it rubs against your legs asking for food. Another way to say this, more informally, is “to suck up to someone.”

Creep dates back to before the year 900. The Old English verb crēopan, which later became the Middle English verb crepen, originally just meant ‘to move slowly, with your body close to the ground.’ The sense expanded to include ‘to approach slowly without getting noticed’ and (originally figuratively), ‘to increase or become noticed slowly, over time.’ It can be traced back to the Proto-Germanic kreupan and the Proto-Indo-European root g(e)r– (crooked). It is related to the Old Norse krūpa, the Old Frisian kriapa, the Middle Dutch crupen and the Dutch kruipen, all of which mean ‘to creep.’ The noun comes from the verb, and dates back to the early 19th century, when it just meant ‘a creeping motion.’ The slang sense ‘despicable person’ dates back to the 1930s, and was American slang, expanding on a now dated meaning, ‘sneaky thief.’ The expression ‘the creeps’ was first used by the poet Emily Dickinson in 1849.

See full definition
Learn more about creep in our forums

Creep in other languages